Is It Heaven or Hell? 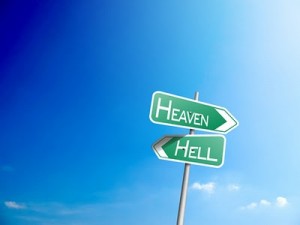 Everyone that is human on this planet thinks about Heaven and Hell at some point in life.  For some, the choice is easy . . .  Jews and atheists have no Heaven or Hell and oddly enough, neither do the Klingons, but they’re not exactly human.  Mark Twain in his short story, “Is it Heaven? Or Hell?” challenges the strict confines of Christianity by exposing the flawed concepts between right and wrong with regards to degrees of lying, i.e. is a “white lie” a sin?  This is a conundrum involving the devout versus “closet” Christians, I suppose.  But is the concept of a Heaven and a Hell really about the reward or punishment in a ubiquitous afterlife?  Or is it more about us being the horse or the buggy in a sin-ridden world, the bridal and bit keeping us on the straight path or keeping in line by following someone . . . or something . . . throughout our lives?  Perhaps it depends on who you think is at the reins –  God, Satan or Donald Trump.

So, how did we get into this predicament about Heaven and Hell?  What’s all the worrying about?  Let’s examine the roots, if you will, regarding the creation of Heaven and Hell.

The first mention of any type of reward or punishment for deeds in the afterlife is in the sixth century B.C. with Persia’s advent of Zoroastrianism.  Zoroastrianism is essentially the first monotheistic religion whose endgame is based on a scorecard of good deeds and bad.  Perform more good deeds than bad, you’re a candidate for Heaven; do more bad deeds than good, burn in Hell.  Should you tie the score, there is an intermediate stage, probably similar to the Catholic “purgatory,” where you can wait to enter Heaven.  The Catholic version is where one waits for the “purification, so as to achieve the holiness necessary to enter the joy of heaven.”  Yippee ki yay!

About 400 years after the death of Christ, the Christian religions pick up the option for the Heaven and Hell idea, and the modern concept of good versus evil really gets rolling.  The Muslims toss their version of heaven and hell in the ring, too, but they don’t get all territorial about it.  For the next 2000 years, all monotheistic religions worth their weight in chicken feathers, paint vivid pictures on just what is a good heaven and what is a good, if evil, hell.

Heaven is a great place to live, apparently, since it is bright, comfortable, and adorned with gold, jewels and other expensive materials, like granite countertops.  The angels are tall, blonde and handsome and everything rests on some type of cloud or fog.  Heaven is the “happening place,” even though there’s no mention of widescreen TV’s.

Hell is smoke damaged beyond repair and is sort of like living in Centralia, Pennsylvania–  always a fire burning somewhere.  Despite all the fires, it’s still a dark, smokey, stinky place where fiery red, blistered demons dance around damned human souls.  To make matters worse, it’s purported by some that Penny Marshall sits in a corner singing “Schlemiel!  Schlimazel! . . . ” for eternity.  That’s gotta be hell!

With those descriptions, it’s no wonder that Heaven is much more popular than Hell.  According to Greg Smith, a senior researcher at Pew, 74% of Americans believe in Heaven, while only 59% believe in Hell.  That means 15% of the people who believe in Heaven, don’t believe in Hell, and you must ask yourself, “What’s the point?”  Nobody in that 15% is threatened with eternal damnation, so why go to Heaven when there is so much fun to be had here on earth.  I guessing that this 15% would probably be atheists if they had any holidays.  Whether you can “hedge” your bet by convincing others that you’re a true believer is questionable.  Devout Christians will remind you that God knows everything, much like your mother-in-law, so you folks on the fence may want to try out the “ah, yeah, sure, I believe!” schtick on the wife’s mom.  If she buys it, so will God.

And just one more thing– although the Jewish bible never mentions Hell, it does refer to a place called Sheol. It’s a deep dark region also known as “the Pit” or “the Land of Forgetfulness,” whose inhabitants live some type of shadowy existence cut off from the rest of humanity.  It really doesn’t sound worse than most assisted-living facilities, so if you need a little practical experience in dealing with a “not-so-heavenly” existence, try checking in at a local 55-and-over community or . . . you could move in your mother-in-law for a couple of weeks.