Like a lot of American kids, I went to Sunday School and learned about God.  Not that 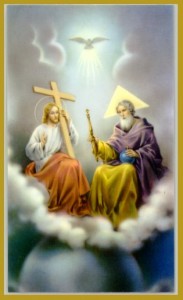 there wasn’t better things to do on a Sunday, but my parents made me go.  “God,” the teacher said, “is the one and only God!  There is only one God and this is the God you must worship!”  O.K.  The teacher is the proverbial “500 pound gorilla” in the room, so I memorize this.  One God, one God, one God, one God, I think to myself.  Got it!

Next Sunday, I’m ready.  I know who God is and even easier, this is the only God I need to know about.  But I’m in for a treat.  I sit in my seat and the teacher passes out some booklets which are the equivalent of my real school’s My Easy Reader! The Adventures of Dick and Jane about a guy named Jesus.  Who in the hell is Jesus?  Jesus is God’s son.  Hm-m-m-m!  So is Jesus some kind of god?  Nope!  Just a son.  So God’s married?  Nope!  Just got a son.  Wife died?  Nope!  Hm-m-m-m-m! So . . . . God’s not married, not a widower and has a son.  I’m confused, I think.  But that’s not all!  Jesus is our savior!  Savior? Saving me from what?  My sins!  What sins?  We don’t know, but like a good dose of viruses, we know you got’em.  Why is he our Savior?  He died for our sins.  Now this answer is more of a “what” than a “why,” but I’m feeling just plain guilty.  O.K.,  there’s two guys I gotta remember now, God and his Son.  Not too tough, I think.

Next Sunday, I’m all set.  There is the one and only God, and his sidekick, or son, Jesus, even though God’s not married, wasn’t divorced, nor did his wife die, and Jesus is our Savior, who died to get the job.  I’m not grasping all this and I’m beginning to like real school a lot more.  This Sunday is a real treat.  This Sunday is the debut of none other than a Holy Ghost!  Holy . . . !  Who’s this guy?  He’s the third person in the Trinity! Trinity? 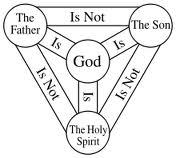 Yes . . . the Father (that’s one!), the Son (number two son!) and the Holy Ghost!  Let’s back up!  First, I’m told about God, the one and only.  Next, Jesus enters the scene and now it’s the two and only.  Today, the teacher slaps the Trinity on me and I’m wrapping my head around three holy figures!  What next?  The Holy Cow???

On the following Sunday, to my relief I find out that the holy hierarchy stops with the big three, or the Trinity as we “religious” folks like to say.  But today, it’s George Carlin’s Heavy Mystery Hour as we ask, “So who’s the Holy Ghost?”  Nobody knows!  He just the third person in the Trinity who hangs around picking up the slack for God and Jesus when they’re either overbooked or on vacation.

Looking back, of course, I believe that the Holy Ghost was thrown in the mix to compete with Halloween, a holiday particularly distasteful to real Christians.  It never hurts in the propaganda business to throw in something a little scary and back when I was a child, any “ghost” was scary.  Christians learned a lot about kids today and gave up on the scare tactic that is the Holy Ghost and renamed him the Holy Spirit. It sounds friendlier and it’s somebody you might want to name your high school after.  Religious leaders realize there’s no competing with Grand Theft Auto, Bones, and NCIS. I recovered long ago from the fear factor perpetuated by the Sunday School mantra of yesteryear, but still, one thing still annoys me about Sunday School after all these years– it always ran through lunch!