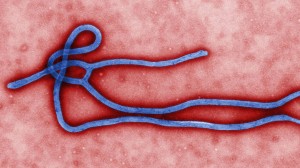 We all know the story . . . rich man buys an island, re-creates dinosaurs to open the world’s most fantastic zoo, dinosaurs escape, eat rich man.  Such may be  the case with the Ebola virus.  This deadly little critter,  Ebolavirus, in now ashore in the United States thanks to Dr. Kent Brantly and his wife in their quest from God to save the African nations.  What does that mean for the North America continent?  Much like the movie,  Jurassic Park, it may very well mean some “oohing” and “ahhing” followed by “crying” and “dying.”

Am I an alarmist?  To some extent, but while the CDC (Center for Disease Control), Fox News, ABC news, and the many medical professionals tout the safety protocols and literally “poo-poo” the dangers of this small, DNA-packed protein shell, consider this . . . the Ebolavirus ranges in size from 80 nanometers to about 800 nanometers.  These distances mean nothing to the average Joe and are generally not understood well by most doctors.  Compare it with a human hair that is 80,000 to 100,000 nanometers thick.  In other words, if the diameter of the Earth is one meter, a nanometer would be the width of a single marble.  Viruses are so small, they pass through porcelain filters used to remove bacteria from solutions. This is very small and we, as a species, are arrogant enough to believe we can control it.

Ebola Virus Disease, or EVD, is caused by four (4) different viruses in the Ebolavirus genus.  But to understand what a virus really is other than a very small “something-or-other,” think about a thing that is neither living nor dead, that invades cells and multiplies until it destroys the cell.  It parades from one cell to the next, destroying, multiplying, destroying and multiplying until it literally runs out of cells to infect or kills its host.  No living thing is immune– plant, animal or bacterium– and it is the upholstery of science fiction.

Described by biologists as an “organism at the edge of life,” a virus is a ball of nucleic acid surrounded by a protein shell, or capsid. Imagine a walnut shell with legs.  But our little “agent” is not stupid . . . even though it can’t reproduce without infecting a host (thus failing the test of a living thing), it’s much smarter than a walnut.  A DNA time bomb, these miniscule guys can figure out a thousand ways to Sunday to mutate and become a different virus.  Being the driving force for diseases from the common cold to all cancers, they are all but impossible to defeat.

With no known vaccine or effective medical treatment, the medical professionals and media statements that “it’s not very contagious, because it’s not airborne,” is ridiculous.  Transferred by touch, bodily fluids and the dead, Ebola need not be airborne for a dandy road trip, and now with four (4) deadly variations of the disease, it’s only a matter of time before it mutates to something else, perhaps a successful airborne pathogen.

We, as a species, are confident that science and technology will save the day.  Hopefully the words of Jeff Blum’s character, the chaos mathematician Malcolm, will never come true, “Nature will find a way.”