“Nor arm, nor face, nor any other part belonging to a man. O, be some other name! What’s 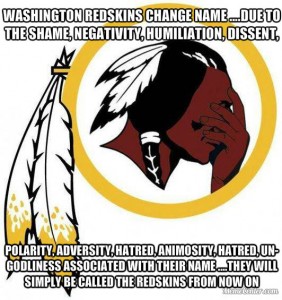 in a name? that which we call a rose by any other name would smell as sweet;”

When Shakespeare wrote Romeo and Juliet and penned those immortal words above, he never imagined a world so politically correct that its people would suffer the self-paralyzing impact of a name.  The late comedian George Carlin stated it best in the album Class Clown, when he said that words don’t hurt people; bad thoughts and bad feelings do.  Take a word, any word, that is potential harmless and assign bad thoughts or feelings to it, and now it’s a bad word.  Once bad thoughts, bad intentions, and bad feelings are attached to certain words, it becomes an evil thing.  But there are no bad words!

One of the most laughable inventions in modern language is to assign the first letter of a supposed bad word and add, well “word.”  The N-word, F-word, or if you want to appear really nasty, the F-BOMB, are a few on the nonsensical list of hyphenated monikers that are designed to make us more civilized, when in reality, we’re simply chasing away intelligent extra-terrestrials.

Now I’m not totally insensitive to people’s feelings and I can understand why blacks want to “own” the N-word, but when we legislate what we can say, it’s harder to determine whose the good guys and whose the bad guys.  John Kennedy understood this by saying that he liked to keep his friends close and his enemies closer.  But the pageantry of political correctness marches on as names, particular long established nicknames, are on the “feel good” chopping block.  The Washington Redskins, a NFL football team established in 1932, is embroiled in the political river rapids that is DC.

The term “redskins” is a slang term for indigenous or native Americans.  It is considered an offensive term although its origin is probably due to the fact Eastern native Americans adorned their bodies and faces with red pigments during the early colonization of America.  Native Americans were always referred to as “Indians” ever since Columbus convinced the world he found the Indies in the late 1400’s.  The aforementioned Indians used the term “redskins” themselves to distinguish between the races, particularly during treaty negotiations, as not to confuse the French, who were apparently easily puzzled when trying to discern white men from red men.  The term became particularly pejorative when Frank Baum’s Wizard of Oz celebrated the death of Sitting Bull by calling the Redskins nothing but a “pack of whining curs.” Needless to say, this went over like a lead tomahawk with our native friends and probably was the turning point for the use of the term “redskin.” More recent use of the name “redskin” is reserved for bar room fights, sports teams and potatoes.  In fact, there are over 60 high schools alone that use the moniker “redskins” as a team nickname.  Not one cowboy or Indian bit the dust due this fact.

The Oneida Indian Nation doesn’t care.  They feel the term “redskins” is an affront to their good name, a racial slur in fact, and want the Washington D.C. football team to change the name.  It seems we can both revere or fault a name.  The fans of the Green Bay Packers are fanatical “cheeseheads,” an endearing term they cherish, but “cheeseheads” is also an ethic aspersion for the Dutch and was an ethnophaulism used by Hitler during World War II.  Of course, all this controversy would be avoided if the Redskins owner, Daniel Snyder, bowed to public pressure to rename the football club the Washington Bravehearts, but, alas, that would probably piss off the world’s population of Scotsmen and I don’t know about you, I’d rather face a tribe of wild Indians than a band of pissed off Scots.  Then there is the pesky problem of trademark infringement since a patent investor (and neighbor to Daniel Snyder) registered the name Washington Bravehearts.  Finally, adding insult to injury, there is a pub named “Bravehearts” in Hellertown, Pennsylvania.

The Oneida’s are not concerned with the plethora of Injun origin names of other sports teams, like Chiefs, Braves and Golden State Warriors, or indigenous state names like Alaska or Ohio.  Pretty persnickety for a tribe that never even complained about a company using their name to hawk dinner flatware.  At any rate, a name change of that caliber would require a lot of wampum that Mr. Snyder is not willing to spend.  That whole idea is “politically correct” nonsense.  If Chief Shenandoah were alive today, he would be proud to be a “redskin,” and be thankful that the French can distinguish not only between “redskins” and “whiteskins,” but “blackskins” and “yellowskins,” too.  As for Coach Shanahan, now jobless after a 3-13 season, if asked about the name change would probably just say, “UGG!”

This entry was posted in Celebrity and Fame, Fantasy Fun, It's part of the language!, Law and our society!, Real life, Ripped from the headlines and tagged native american, NFL, nicknames, politics, sports, Superbowl. Bookmark the permalink.
f898301b37f6ae597321c58a3ae10af1-332