It’s that time of year, when the sun is low in the sky, the weather colder, and spirits are a 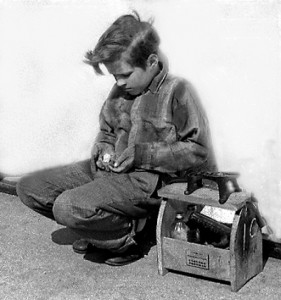 little higher as we celebrate Christmas.  Whether you associate the holiday with Jesus Christ, Santa Claus, or the Roman week of lawlessness, Saturnalia, it is a time of reflection for everyone . . . one way or another.  Last year on this date, I published a poem that is part of a family tradition, Little Tim’s Christmas, which tells the story of the last day in the life of a indigent shoe shine boy at the turn of the Twentieth Century.  It is a sad tale which reminds us to be a bit more kind to those less fortunate than us.  It is fitting to re-publish this tale a year later.  Merry Christmas!