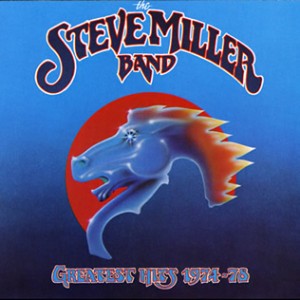 Poetry and literature can be explicated.  Writings by Shakespeare, Keats, Yeats and Coleridge are a mystery at first reading, but many scholars and academicians read, dissect, explain and regurgitate the meaning and reasoning of all written things throughout history.  Unlike Hemingway stories, much of the world’s great literature carries a deeper meaning than the printed words portray.  This is not true for song lyrics, however, where the term poetic license is stretched beyond a boundless frontier.

In Steve Miller’s The Joker,  he apparently was issued a license to kill . . . kill the English language.  While it’s not hard to imagine a “space cowboy,” “gangster of love,” and even “midnight toker,” many are taken aback by the fact that the protagonist in The Joker speaks of the “pompatos of love.”  What the hell is the “pompatos of love?”  Most people assume that Steve Miller used poetic license to make up the word and even he is quoted as saying, “it doesn’t mean anything–it’s just jive talk.”  Even though, Miller fans think that he created the word, that’s not the case.  Miller used the word in an earlier song from 1972 called Enter Maurice in a line that states, “My dearest darling, come closer to Maurice so I can whisper sweet words of epismetology in your ear and speak to you of the pompitous of love.”  The spelling is different, but with so-called self-coined terms, spelling is the domain of the creator, right?  That would be fine if Miller created the word, but thanks to some research by Jon Cryer of Two and a Half Men fame, we all know now that the word was included in a 1954 song, The Letter, sung by the Medallions.  To add insult to injury to Miller’s myth, pompatus is a legitimate word and is defined by the Oxford English Dictionary to mean “act with pomp and splendor.”  And in case you’re wondering, epismetology is a branch of philosophy concerned with the nature and scope of knowledge.

Not all goofy song lyrics are surrounded with a mystic that fogs the facts, and we accept them without question when they’re accompanied by a musical score.  There is something missing when you read song lyrics with no tune, so the following examples are only part of the equation.  Most stupid lyrics are sung to great music, because without it, it’s a song that never gets played.  Here are a few of my favorites:

Manfred Mann’s Earth Band was known for good music despite a stream of nebulous lyrics.  Blinded by the Light, released in 1976, was a mega hit and, apparently, no one bothered to listen to the words, like “Blinded by the light, wrapped up like a douche into the rotor in the night,” and “little Early-Pearly came by in her curly-wurly, and asked me if I needed a ride.”

The Turtles Elenore is a happy song . . . perhaps a little too happy when you read these words:

Elenore, gee, I think you’re swell
And you really do me well
You’re my pride and joy, et cetera

Et cetera?  They certainly knew how to stitch together a hit.  Another Turtles song, Happy Together, although considered an oxymoron by most married couples, makes as much sense as any other Turtles song:

So happy together
How is the weather?

The song Once In A Lifetime by the Talking Heads, another mega, shows that lyrics need not make a lick of sense:

Songs and song writers need not be accurate in the least to have a chart busting single. Billy Joel’s The Ballad of Billy the Kid is such a song.  The song states that Billy was from Wheeling, West Virginia, robbed his first bank in Colorado, rode alone, never had a sweetheart and was hung.  William Bonney (a.k.a. Billy the Kid) was from New York City, never robbed a bank, rode with a large gang, was a ladies’ man and was shot to death, not hung.

Perhaps the greatest and most creative band in history, The Beatles, was the best at stupefying song lyrics as demonstrated by a few verses from I am the Walrus:

I am the eggman, they are the eggmen / I am the walrus, goo goo g’joob.
Yellow matter custard, dripping from a dead dog’s eye.
Crabalocker fishwife, pornographic priestess,
Expert textpert choking smokers

William Congreve wrote, “Musik has charms to soothe a savage breast.”  What the lyrics do to a savage breast is another matter.  I leave you with the wisdom of lyrics by Freddie Mercury: