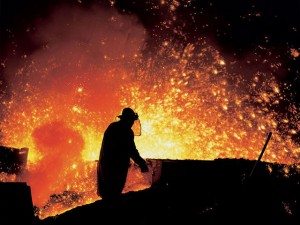 hardworking America–  a 18th Century colonist wielding an axe, a 20th Century steel worker pouring a white-hot ingot, a 19th Century railroad worker pinning down a steel track with a sledgehammer.  These stereotypical images of hard working Americans supposedly represent how the United States became a powerful, wealthy nation and how the hard working individuals are the backbone of any successful nation.  But is that really the secret to a strong and dominant country?  Did America build its reputation by chopping down one tree at a time or driving railroad spikes by hand?  As romantic as it all sounds, the answer is no.

The idea that America is great because of its work ethic is a myth.  Hard work didn’t make the United States the economic and industrial giant it is today.  Peoples of other nations work hard and many work a lot harder than those in the U.S.  What’s the difference?  It’s America’s laziness.  No one or no nation becomes strong on the backbones of its people in modern times.  Ingenuity and invention are the keys to success.  Some mechanics and tradesmen called it the “merit” shop where workers use their brains rather than brawn to accomplish tasks.

Americans and American inventors are always looking for an easier way to do something–  anything!  Throughout modern history, British ingenuity and cleverness prevailed and by the 19th Century, Britain was one of the most powerful nations on earth.  Britain is responsible for a little over half of the modern day inventions in the world, however, in a much shorter period of time, the United States can claim one-quarter of the world’s inventions.  Most American inventions occurred in the last three hundred years, so most of those are ideas or patents for machines and other labor saving devices.  No one mows a lawn with a “non-powered” push mower, washes clothing on a rock or kneads bread by hand.  The pain and effort of both small and large tasks are eased by the men and women who sit at a desk or around corporate conference tables and think of an easy way to perform laborious tasks. 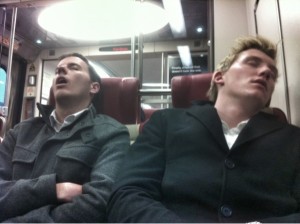 So the next time you’re sitting around the coffee table, poker table or at a bar with friends, and someone has the audacity to start bragging about how hard we work in this country, set the facts straight.  Let them know that industrious is NOT synonymous with hard labor.  And if they’re still not convinced, ask them when was the last time they saw anyone in Britain do any work.