This spring during an outdoor rowing event, I noticed everyone using a bottle of hand 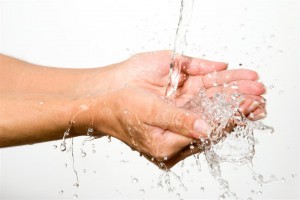 sanitizer on the edge of a picnic table.  It was a pump-type dispenser and was in constant use as athletes, parents, and coaches were inclined to reach down, give it a push and rub a clear, cold dab of the stuff between their hands.  Invented in 1988 by the family-owned soap company, Purell, the hand cleaner boosted sales of other Purell products, but the new alcohol-laced cleanser itself didn’t sell very well.  Now the little pump bottles pop up everywhere– schools, hospitals, businesses, airports and airplanes.  The “human versus germ” is a hand washing, kitchen countertop cleansing battleground that is its own epidemic.  Even George W. Bush was dubbed a racist for dabbing a little of stuff after a Barack Obama handshake.  It begs the question, “Are we too clean?”  With the boundary of clean versus dirty sliding ever so toward a dead and disinfected world, are we in danger of destroying ourselves?

There is a tale about a village in Scotland that massacred all the wolves in the area because shepherds were losing some sheep, however, in a short while, rats overran the village for there were no wolves to feed on the rats.  The village imported wolves to restore the natural balance, accepting the fact that a few sheep needed to be sacrificed to keep the village safe from a flood of rats.  Are we creating our own bacteriological bag of rats?

The problem began with children.  In the not-so-far-distant past, children were not all the rage they are today.  No one thought his or her little brat was the next earth savior and let it behave as if the undisciplined spawn was the next antichrist.  Children were seen and not heard, and there was a good reason for this.  It was an adult world with adult problems and children just weren’t included.  Children were free to go out into the yard, get filthy and hopefully return so exhausted they could be dumped into bed. Adults didn’t worry about what their kids were doing every minute of every day.  Kids had things to do . . . kid things!  Adults were busy drinking, smoking, and doing evil stuff . . . adult stuff!  Then things changed.  Baby boomers found out that germs make people sick and even die!

Now, the word “germ” is a misnomer, as there is really no such thing as a germ.  What makes us ill is a general group of critters known as bacteria and another group even tinier called viruses.  Most of these guys don’t even bother us, and many are actually beneficial, so the group that is nasty to humankind is deemed pathogens, which is Greek for “producer of suffering.”  Today, many of these pathogens can be controlled in the body by using certain drugs, but the “well educated” baby boomers found out that they could wipe out the pesky critters with preemptive attacks.  Like the Texas State School Board wiping out human evolution textbooks, they started sanitizing the world.  First, though, they would need to sterilize their most precious possession, the little demon seeds they call their own.  No more mud pies, rolling in the grass, or petting the cat!  These things became taboo in the new world order of germ-free America!

Once newscasters convinced the baby boomers that someone was out to capture their kids, the battle plan was complete!  Don’t let children out of the house!  That’ll keep them safe, where they can breathe in dust mites, play video games, eat chips and get fat.  Oh yes, we’ll slather them with alcohol-laced products on the outside while huffing and stamping our feet about the evils of using alcohol-laced products on the inside.  The battle cry “The only good bacterium is a dead bacterium!” was born.  But the battle cry is all wrong.

Our body is full of bacteria fighting for the delicate balance of good “germs” versus “bad” to maintain the condition we call healthy.  Without our normally invisible friends, there would be no yogurt, sauerkraut or cheese.  During our normal lives, particularly when we are young, exposure to all types of bacteria help us to become stronger by developing immunities to such critters.  Most bacteria living in our background, that is, around the house and in the backyard, are not bio-safety level 4.

More dangerous is the fact that bacteria and viruses, like most living things, are designed to survive.  They do that by adapting, or mutating, into a life form that can survive.  This means they develop into drug-resistant little critters that can’t be easily killed, making them an ever stronger and increasing more dangerous.  This science fiction scenario is quickly becoming a reality as we spray, wash and wipe down everything and anything with alcohol and other dandy poisons.  How do we reverse this trend?  Prudently wash your hands with ordinary soap and water, shower daily, cook your food thoroughly when required (a rare steak or burger won’t kill an adult if the meat is fresh and handled properly) and let your kid play in the dirt.  Feed your kid peanuts when he’s young, and just wash him or her up at the end of the day, much like you do with your lawnmower.  Give the good bacteria a chance!