The Wonder of It All!

It’s a bright, wintery morning as I watch the birds feed on the back porch.  Chickadees, 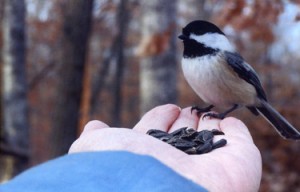 titmice and juncos bounce around the porch and table working hard for a breakfast consisting solely of oiled sunflower seeds, save for an occasional stray corn kernel that pops out of the pile.  The chickadees are very social creatures, lining up in a nearby rhododendron, flying in one at a time, picking up a seed and retreating again.  The titmice are a little less polite, as they fly in two or three at a time, each bird picking up a seed,  discarding it and grabbing another before flying off again.  The juncos are party animals, hopping around the deck, picking up a seed, devouring it, then hopping to the next seed, never leaving the deck until gorged.  I glance at the outside thermometer mounted above the porch . . . 15 degrees Fahrenheit. . .  fifty-five degrees colder than in the kitchen where I sit.

I press my finger against the glass of the sliding door.  It is extremely cold to the touch, but nowhere near the temperature outside.  It is a “double-glazing,” often referred to by the brand name “Thermopane.”  I look at the birds, the snow, the dwindling pile of seeds and think about the wonder of it all.  I think of all the inventions and knowledge our species gathered over the past several thousand years, wonder why we cheat, steal, rob, murder and go to war.  And I wonder if we would be as advanced as we are without those horrible social pressures.  Most advancements in chemistry, physics, engineering and medicine were borne of adversity and atrocity such as war.  And I wonder how it affects me as I sit in my kitchen . . . a kitchen with electricity, modern appliances, a constant supply of fresh water and a collection of waste water piping carrying liquids, fluids and bits of organic material no longer any use to me.

I wonder if the omnipresent cell phone texting generations ever think about how we got here, and maybe, just maybe, where we’re going.  I wonder.  But today . . . today, none of that matters, as I sit on a stool, inches from a transparent barrier five-eighths of an inch thick that separates we humans from the rest of nature’s beasts.  By now the seeds are few and the juncos are not quite gorged.  Soon I will go out and replenish the seeds, because no junco, or no one, goes hungry here.  Five-eighths of an inch; a difference of 55 degrees and I think about the wonder of it all.