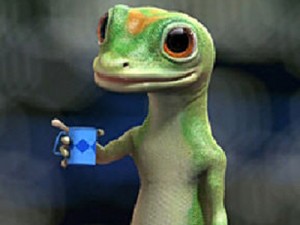 Often, good comes from controversy.  This is particularly true of the Screen Actors Guild strike in 1999 which bore the endearing character we know today as Martin, the Geico Insurance mascot, or the Geico Gecko.  Martin is a Gold dust day gecko who hit pay dirt when the Screen Actors strike prevented companies from casting live actors in commercials.  The anthropomorphous lizard was cast as Geico’s spokesperson voiced by none other than Kelsey Grammer before the mysterious accents were attributed him by Steve Kelly and recently, Jake Wood.  What surprised me the most was his perfect American accent when the interview began.

Trout:  It’s odd to hear your real voice as you introduced yourself earlier.

Martin:  Oh, you mean my American accent, of course.  Everything’s a voice-over these days.

T:  Does that make sense to you?  I mean, you have a lovely voice and great diction.

M:  Makes no sense to me.  But being a lizard, well, I don’t carry a lot of weight in this industry, if you know what I mean to say.

T:  Well, I’m partial to lizards, myself, because of all the requests I’ve sent out for interviews, only the lizards responded, you and Godzilla, that is.

T:  So do you like working in commercials?  I mean, are there plans for you to move on?

M: I’d certainly like to, but my company, Berkshire Hathaway that owns Geico, has a strict policy about me doing any other work right now.

T: Since Berkshire Hathaway is owned by Warren Buffet, you actually work for him, right?

M: Right!  So you can see that breaking the contract I have now is out of the question.

T:  Interesting . . . so do you believe in the product, car insurance and all?

M:  Oooo!  Must be careful here.  Big brother may be listening.  Just kidding!  Actually I use Geico for my motorcycle.

M:  Yes, a miniature one built to my specifications!  It was Harley-Davidson’s idea.   Didn’t cost me a penny as it was an advertising promotion.  It’s a Soft Tail!

T:  And Geico charged you for the insurance?

T:  Enough said.  So Geico is your past. present and future.

M:  Yes, I think so, but some have approached me about doing some children’s shows, Saturday morning television, things like that.  The Barney folks contacted me for a possible guest appearance, but I would never do that.

M:  I’m not working with a fat, purple dinosaur that bounces around like an idiot.  It’s a matter of pride.

T:  Wow, glad to see you have high standards.

M:  They don’t need to be too high not to work with that purple saurian version of the Pillsbury Doughboy.

T:  Well, it’s a real pleasure to meet you in person.  Again, hearing your American accent for the first time is a shock.

M:  You’re not the first person to say that.  My wife calls me a “reverse” Hugh Laurie.  Loved that show by the way.

M:  Yes, I even thought of a good logo for Geico based on Laurie’s dialog, “Everybody lies!”

M:  Imagine this!  A green tee shirt with my picture on it with the words, “Everybody Buys!”