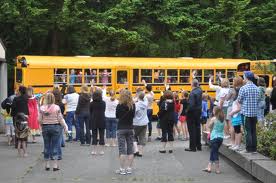 Beyonce Knowles or Mariah Carrey, you’re in that category.  It’s gonna take some time, hard work and talent . . . or you could sit your fat ass on a school bus for 10 minutes and get orally ripped by a bunch of rude, crude and socially unacceptable grade school rats.  That’s what Karen Klein of Greece, New York did!

Everyone in the United States and about half the world knows about Karen Klein’s infamous 10 minute youtube video illustrating the castigations one may suffer at the hands (and mouths) of debased seventh graders.  But a few questions came to mind immediately after I viewed this video.  What was a 68-year old woman doing on a school bus with a bunch of 13 year-old kids?  Answer?  She was a bus monitor.  What is a bus monitor?  Answer?  A bus monitor maintains discipline and safety.  More questions floated up from the bottom of my suspicious mind.  Who thought this position was a good idea?  Answer?  The Greece School District Board of Education.  Why did Karen Klein apply and accept this position?  Answer?  No clue.

Now, I’m not defending the bruising little brats that tormented this woman and they deserve any and all punishment.  However, when I read the blogs and comments comparing these brats with the brats of yesteryear, I just want to hurl.  For those of you who believe that kids these days are worse than kids 50 years ago, you’re either under thirty years of age, high, or brain-dead.  When I rode a school bus in the 1960’s as a preteen, it was brutal.  If an old fart sat his or her fat ass in a seat on the bus, the poor old soul would be, figuratively speaking, “skinned alive.”  Anyone who paints a picture that riding the big yellow monster was some type of treat, needs serious counseling.  Today, as an adult male and ex-athlete, I’d refuse to mount a bus loaded with screaming demon spawn.  You can blame the parents, you can blame the schools, but even when good kids get together, it’s really bad news. 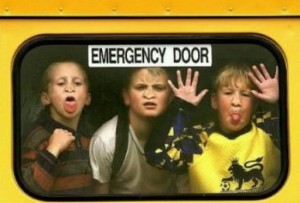 During an appearance on NBC’s Today Show, Klein said it took “a lot of willpower” not to respond to the derogatory remarks of the four boys on the bus.  Willpower?  She was no ordinary bus stop pickup.  She wasn’t a poor old lady who was given a lift because her car broke down.  She was in authority.  She didn’t tell them to behave nor did she tell the driver to stop the bus.  She just rode the bus and collected $15,000.00 per year, poor dear!  When I watched the video, I saw ill-mannered brats allowed free range by the person who was assigned to control that very behavior.  I saw a woman who sat on the bus and collected $70,300.00 per minute for not doing her job.