And Justice For All! 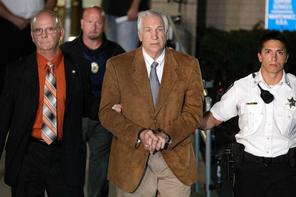 There’s an age-old adage in football that goes  “What we do here, what we say here, stays here when we leave here.”  The sunny side of this old saw makes perfect sense, as players are not allowed to divulge details about practice and plays.  Every team strives to surprise the other with various plays and if the opposing team is privy to such plays and information, well, you can see the disadvantage to the exposed team.  It’s the same theory behind military secrets, for after all, football is war.

The dark side of this saying is that it is an excuse to keep everything secret, no matter how dastardly.  That dark side reared its ugly head in the recent report by former FBI Director Louis Freeh regarding the sexual abuse scandal at Penn State.  The Freeh report claims that Penn State officials concealed “critical facts” concerning the acts of Jerry Sandusky, assistant coach to Joe Paterno.  It states that Penn State officials, including JoePa, failed to act to protect the children involved and were more concerned about the publicity such facts might generate for the Penn State football program.  Now that the cork is removed from the bottle and the evil genie is unleashed, the concern is for the future of Penn State’s football program.  But isn’t that how this mess started in the first place?

The practice of keeping big social and political secrets is as old as prostitution, as both habits are extraordinarily compatible.  Secret societies were the first organizations to begin hushed activities, which logically spread to social fraternities who adopted the same rules to keep their activities on the QT (on the quiet).  Naturally, many of these men (women were never involved) became captains of industry, founding and running large corporations and companies that mimicked those rules and regulations of secrecy.  It’s the land of the big guns puffing on big cigars, swirling cognac in brandy snifters and so far, it’s unstoppable.

As a member of a fraternal organization that keeps secrets, I always wondered why.  The obvious answer was the embarrassing rituals we performed.  “What would my mother say if she could see me now!” was a thought that often crossed my mind.  But along with the secrets was a code of honor.  All secret organizations, including football programs and other organized sports, vow to uphold all that is good in humanity.  It’s not the societies or their credos that are evil, but the people in those groups who decide to hide behind the promise of secrecy to commit untoward acts.

Will this scandal be the end of Penn State football?  Certainly not!  If you cripple Penn 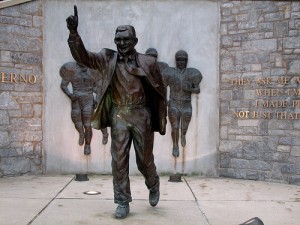 State, you may as well investigate football programs from midget league to the NFL.  Every team tucks away secrets that deteriorate with time.  Now the Board of Trustees of Penn State wrestle with the decision to remove the Joe Paterno statue, and although I wouldn’t walk across the street to see it, I’m sure there are thousands of proud Penn State fans who will park their kids in front of it, snap pictures, and tell tales of how Granddad scored the winning touchdown.  Justice was served and Sanduski is convicted, but at what price?  Joe Paterno was only a football coach, but they named ice cream after him (Peachy Paterno) and erected cardboard cut-outs of him in hardware stores holding bathroom fan duct work.  They did that . . . the people of Happy Valley . . . not Joe.  They lost sight of what makes a football coach.  Joe made two mistakes–  he stayed too long, and he adhered to the secret society’s nasty habit of keeping his mouth shut.  Despite the Freeh report and the terrible lie by omission, Joe Paterno did dedicate his life to that team and to those guys that played each year.  He made them study and he was a pretty good football coach.

When this is all over and the political, social and emotional debris is swept clean, whether you liked Joe Paterno or not, his legacy will stay intact, if not a bit tarnished.  Still, it couldn’t hurt to gather just a few laurel leaves.