Time on your hands!

What is time?  Apparently, this is a difficult question.  Behold these textbook definitions:

1 – system of distinguishing events: a dimension that enables two identical events occurring at the same point in space to be distinguished, measured by the interval between the events.

2- period with limits: a limited period during which an action, process, or condition exists or takes place.

Isn’t that a lot clearer?  Didn’t think so!  Time mystifies humankind.  We are obsessed with 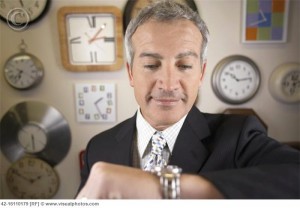 it, yet we can’t see it, hold it or contain it in any manner.  We can’t even define it with any clarity, but we’re all guilty of glancing at wall clocks, our cell phones, computer screens, pocket and wrist watches in an effort to track time.  Bands sang about time– Jim Croce mused about Time in a Bottle, the Rolling Stones sang that Time is On My Side, and the Guess Who had No Time. To complicate matters more, some furry-headed physicist in the early 1920’s discovered that time can be altered, which belies the definitions listed above.

One thing is sure, time is never ending and buries us all.  Although time is here for the long haul, few of us can comprehend a great period of time.  What is a long time?  For a teenager entering high school, four years may seem so far away.  Yet, for a senior citizen, a decade means nothing.  What about a hundred, a thousand, or even a million years?  Who among us can understand a period of time lasting one million years?

Someone with lots of time on her hands is Mother Earth.  Most scientific mental moguls agree that the earth is about four and a half billion years old, a length of time that’s meaningless to creatures with a life expectancy of less than 100 years.  To demonstrate the magnitude of such time, I present two geologic time comparisons below, the first, a time conversion; the second is based on height.

Imagine an earth that is four and a half years old, where a billion years equals one year.  The first year is almost lifeless as the earth cools leaving the surface mostly covered in water.  The first primitive life, single-celled prokaryotes form just before the end of the first year.  Another year goes by as more complex single-celled creatures appear, those with nuclei and complex organelles.  A year ago, the first multi-cellular creatures make the scene, but nothing that is construed remotely complex as an animal or plant.

Organized multi-cellular critters that we might recognize today, like the sponge, develop about seven (7) months ago, while the first dinosaurs live two and a half months ago, and the meanest of all, T-Rex stomps around less than a month after that.  Twenty-four days ago (65 million years),  it’s over for the dinosaurs.

The earth’s most dangerous creature evolves next and its modern form, homo sapiens, appears eighteen and a half hours ago.  The entire written history of human kind is two and a half minutes long, and Columbus landed in the West Indies 20 seconds ago . . .  in a world four and a half years old.

If you prefer vertical comparisons, New York City’s favorite phallic symbol, the Empire State Building, does nicely.  Considering the ESB (Empire State Building) is 102 stories, life begins on the twenty-second floor.  Our friendly prokaroytes of the first example live happily on the forty-fifth floor, and if the elevator stops at the seventy-ninth floor, when the door slides open, a party of multi-celled slime molds are likely to greet you.

Just ten floors above, or the eighty-ninth, floor, it’s homecoming with a few sponges swaying, crabs dancing, and roundworms bouncing about.  Things are crowded on floor 97 as the dinosaurs move in, but don’t push the elevator button for floor number 100– you’ll be greeted by T-Rex! 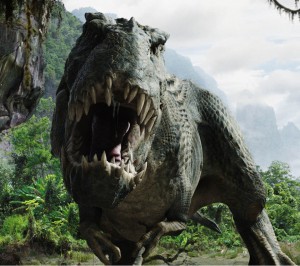 So if you’re out of time, have time on your hands, believe that time is money, think time’s a-wastin’, need a time out, need more time, or you have time to spare, just remember . . . time is relative and unless you’re Earth, there’s less time than you think!