Ever notice how other people’s kids are out of control?  The same is true for their pets, too!  If you ever tried to enjoy your meal at a restaurant under the serenade of some screaming brat at the next table, or lied awake most of the night listening to the neighbor’s dog barking, you know the frustration.  The solution?  In a tale of imagination, you, or some other competent crusader, steal through the night, silently strangling noisy children and muting barking canines with a stealthy flick of the wrist, but you risk jail time acting as your own neighborhood Angel of Death!

thinking they were “special” and “all-knowing.”  Being the first generation to grow up with television, the thirst for more virtual violence and death on the tube didn’t spur this generation , or subsequent other generations, to become masochistic masters of house and home as some predicted.  Quite the opposite!  We are now a nation of jellyfish!

Post-World War II parents can’t say “no” to kids and pets (Yes, if you own a pet, you’re now a parent.).  And I don’t refer to the big things.  Buying your kid a Lamborghini after she’s graduated by Harvard Law is perfectly acceptable.  She’s probably a raging, spoiled, little brat at the point of no return already, so what’s the harm.  You must teach your child and/or your pet (if they’re not one in the same) some negative key word when they newly arrive.  Mothers are natural emergency responders with the ability to commute danger signals to infants through facial expressions.  In a scene resembling science fiction, a baby crawls towards danger, and an alarming look from mom causes her baby to stop and wait for either an approving glance or rescue.  It’s these little negatives, or signals, early in life that promote safety and good behavior as an adult.

It’s important to use a key word that is universal, easy to remember, forceful, and usable in every situation.  That word is “no!”  Both children and pets respond well to an emphatic word that denotes, “Stop in your tracks, or there will be hell to pay.”  It is even more effective if it’s a male voice.  Without a biology lesson, suffice it to say the male voice thing involves genetics.  But this is a very difficult concept for the “bike helmet” generation to grasp, since none of them can even imagine disappointing a child in the least . . . even when that charming, little brat is wrong!  And now this seems to go double for their cute, dander-ridden pets!  If you believe that our society is going to hell in the proverbial hand basket, save your cab fare.  That hand basket is parked just outside your door, and waits to take you on a tormented tour.

There is no sign of any future generations re-evolving from cartilaginous chordates to vertebrates, and spine transplants seem not on the horizon, so what’s next?  How far can we, as a destination-doomed species, take this sacred crusade?  Will the pendulum swing back against submissive parents and return to those good old days of “‘children should be seen, and not heard?”  (And that goes for your little dog, too, yes, lovable, but still not a real child!)  Ironically, the answer to the last two questions is the same word that’s the solution– no! 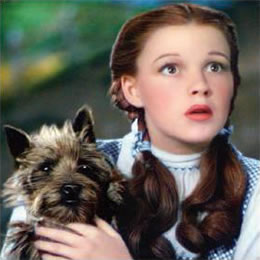 And if you do decide that being in jail is a better alternative than living in a world dominated by adolescents and domesticated animals, just remember o’ self-appointed Angel of Death . . . my house will be the one with the lamb’s blood over the front door! 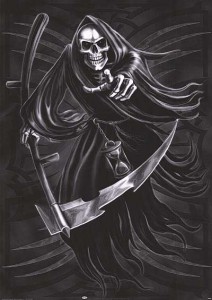