A woman walks up to the TV screen and says, “MD Anderson Cancer Center made my cancer history!” as she swipes at the word “CANCER” with an imaginary marker.  Another man approaches the screen in the next scene and parrots the same line as he swipes a large red splotch across the word “CANCER.” 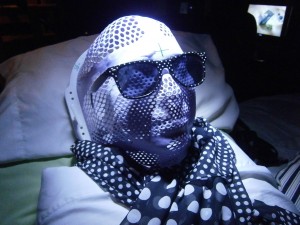 “Annoying isn’t it?” I say to my wife sitting next to me.

“Yes . . . very annoying!” she replies.  You see, she is battling stage IV cancer and knows that her cancer will never be history.  And I think to myself, Why is MD Anderson advertising?  Not enough revenue or patients?  Is there not enough cancer to go around? At any rate, the media stream of so-called “cured” cancer patients is doing nothing for those dying of the disease, except to remind them constantly that they are, indeed, dying.

Kris, my wife, is bombarded by radiation, infused with toxic chemicals and now watches endless ads that seem by their own design to remind her how lucky she is to have cancer.  But, she never complains, never seems afraid, and worries about all those around her.

It started with lower back pain, much like the symptoms of a bulged disc–  slight pain down one leg, numbness and tingling.  After a week of treatment with steroids and analgesics, she could barely walk.  She was sent for an MRI and the next day, she received a call from the doctor’s office.  She picked up the phone.

“Doctor Scharle would like to see you at five-thirty . . . and bring your husband with you.”

We arrived at the Doctor’s office and Kris shuffled into the examination room. Before the Doctor entered the room, Kris looked at me and said, “I’ve had a good life.  Thank you.”

“You don’t think this is going to be good news, do you?”

“Well, no, but let’s see what’s going on first.  They do some amazing things now.  Let’s just wait and see what this is”

The Doctor and I helped her onto the table.  After a twenty minute examination, he helped Kris sit up, sat at his desk with her file in hand, looked at us and said, “The MRI shows lesions on the spine.”  There was a few seconds of silence.

“Where do we go from here?” I said.  He quickly explained that we could do testing on an outpatient basis or she could be admitted to the hospital.  We both agreed to go directly to the hospital.

From the first night on, everything was bad news.  The final diagnosis was Stage IV non-small cell lung cancer.  Stage IV, however, was a description that did not do this cancer justice.  It was in the pelvis, the entire length of the spine, ribs, collarbone, base of the skull, liver, brain and brain stem.  Technicians wheeled her back after every scan with sad faces and shaking their heads.  The usually tight-lipped medical personnel would utter the same words, “How does this happen to such a nice lady.”

We requested an oncologist called “Dr. Anna” for her aggressive approach and compassion.  She outlined the battle ahead with unnerving accuracy and truth. She could only extend Kris’ life.  Her prognosis was a three month period without treatment; with treatment,  a few more weeks, months, even years with some luck. 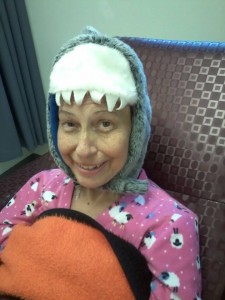 Beginning with radiation to ease the pain in her back and attack a small, but dangerous tumor lodged in the brain stem, Kris then endured massive doses of chemotherapy drugs, a regimen that required her to be infused for six hours every three weeks.  I would often sit with her while she slept during therapy and watch the other patients leave in two or three hours.  It was then I realized that there was “cancer” and then there was “CANCER.”

I watched her lose her hair, her appetite, thirty pounds, but she never lost her dignity, her smile or her empathy towards others.  And through it all, something amazing began to happen.  The tumors began to shrink . . . almost all of them.  The only exception was a five millimeter lesion in the brain stem.  A small tumor that was the equivalent of shoving a marble into an electrical conduit.  An area so delicate that no operation was possible.

Ten months after the diagnosis, I noticed small changes.  Changes that could be caused by the heavy therapy or the cancer.  By now, I logged thousands of hours in internet research regarding cancer.  I now knew more about cancer than I ever cared to know.  Kris began forgetting certain words by the end of June.  By July, she was unable to finish sentences clearly.  The beginning of August, her beautiful handwriting deteriorated.  The third week of August she was unable to speak or walk on her own.  She began to pull up the bed sheets to her chin with cramped hands and then push them off again constantly.  Her face was contorted and she appeared to be in pain.  I asked if she needed anything for the pain, and she rocked her head back and forth indicating “no.”

I sat in front of the computer in the bedroom, opening the many bookmarks on cancer and typed in the symptoms.  What appeared caused me to put my head on the keyboard . . . and cry.  All links read, End of Life Signs. It was almost over.  And we lost.

Some imperceptible change in the brain stem tumor was short circuiting the nerves, applying enough pressure to disrupt the delicate balance between thought and action. I asked her if she wanted to go to the hospital.  She slowly nodded her head.  All the tests came back unchanged.  No evidence that the other tumors were not in check.  It was the last desperate attempt to find something else, something treatable.  The next step was hospice for comfort and care.

Once the living agree to place a loved one in hospice, the concept of legal euthanasia becomes reality as the loved one is disengaged from all the life saving fluids and monitoring equipment.  Like a slowly sinking ship in the dead of night, the dying become weaker and weaker as they dissolve into what Shakespeare described as the “undiscovered country.”

Eight days later, in a beautiful serene and comfortable setting, Kristina drew her last breath.  No fanfare, no pain, but a series of calm and ever shallowing breaths.  She was surrounded by friends and family. She was never alone.  Before the moment of death, all I saw was that young girl I met over thirty-five years ago– jeans, flip-flops and hair to her ankles.  After . . . it was the face of cancer, a countenance I hope never to gaze upon ever again.