Most sports-minded folks know the story of the Greek runner Pheidippides.  After the 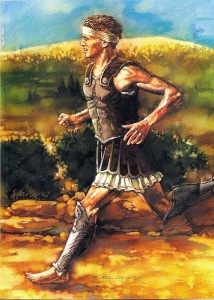 Athenians defeated the Persians at the Greek city of Marathon, he’s the gent who ran back to Athens to tell of the victory.  When he arrived, he yelled, “Nike!” and dropped dead.  Some 2500 years later, Bill Bowerman and Phil Knight named a shoe after Pheidippides’ historic howl.

Sad part is, this “first” marathon most likely never occurred and is a myth.  Pheidippides’ earlier trip is more noteworthy and demonstrates that a 26 mile trip to Athens was a mere mosey in the park.  Pheidippides was one of many Greek messengers or runners who delivered news about the city-states of ancient Greece.  Before the battle of Marathon,  Pheidippides ran 140 miles to Sparta to encourage the Spartans to assist the Athenians against the Persians.  The Spartans couldn’t leave Sparta until the full moon for religious reasons (wouldn’t you know it) so Pheidippides ran the return trip, all 140 miles of it, back to Athens.  It was a 36 hour trip each way! It’s doubtful that a simple “marathon” would kill such a man.

The marathon tradition continued throughout the Twentieth Century for many great hardcore distance runners, but as of late, say the last 10 years, the marathon is an”every man, woman and child” bucket list ambition.  Today, marathons and many other difficult sports events for amateurs are clogged with people who are satisfied with “finishing” the event with little interest in competing.  It never occurs to these so-called athletes to look at the clock and realize one simple fact–  it’s a race!  You are supposed to train, prepare, learn and compete. 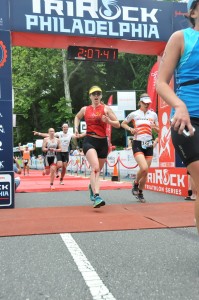 The boating industry uses a great term for someone to knows nothing about navigating waterways or boating safety–  corinthians.  These “sports” corinthians are as dangerous as those on the waterways with their blatant disregard of the rules and cheerful self-indulgence as they step on others or cut them off on the course.  Nice people, but not athletes.  They are an insult to true amateur athletes who train, learn the rules and compete with all the nerve and sinew humans can muster.  They push into starting corrals with faster paced runners or competitors clogging the course when the real athletes are forced to pass them.  They are a danger to themselves and others and many die due to overexertion and stress, or in the case of triathons, they drown during the swimming portion.

Marathons, shorter distance runs and triathons are full of corinthians as the number of participants swells each year.  The Philadelphia Blue Cross 10-mile Broad Street Run is one race that suffers this fate, as the number of runners now tops 40,000!  Because of this, many of the races now only allow admission by lottery, leaving many top-notch athletes out of the race.

If you’re not serious about an event, except to finish or show your friends “you can do it,” do something else.  Find a fun run, walk-a-thon or just sit on the couch where you belong!  Don’t dream about being an amateur athlete unless you’re willing to go the distance– learn the rules, train and practice sportsmanship.  Anything less and you’re a threat!