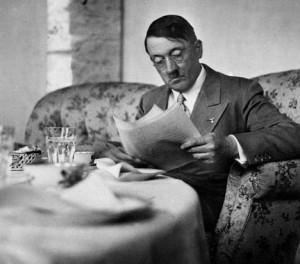 from the Greek words eu (good) and genos (birth), eugenics is study of improving the human race, particularly through selective breeding.  Images of the atrocities committed by the Nazis during the 1930’s fill our heads as history reminds us of Hitler’s fallacy of creating a “tall, blue-eyed, blonde-haired super race of Ayrans” by eliminating those people with unfavorable characteristics.  That whole idea was off to a bad start, since “Aryan” describes prehistoric Iranians.  The characteristics Hitler was describing are “Nordic.”  More fascinating, however, is how a short, bombastic, dark-haired, brown-eyed Austrian convinced the German people that he was the man qualified to build a master race.

Fictionally, eugenics never fared any better than in real life.  Armed with the belief that human beings are imperfect and can be improved, the fear of the end result caused writers and playwrights to “throw a monkey wrench” into any story involving the improvement of humankind.  Whether it’s Dr. Jekyll and Mr. Hyde, Homunculus, The Island of Dr. Moreau, or Frankenstein, the message is pretty much the same–  don’t fuck around creating the perfect being!

Of course, all these writings were based on creating soulless creatures and were prior to the little skit put on by the Nazi’s in the 1930’s and 40’s.  Most “eugenics” based writings were considered wild science fiction that could never happen or dealt with the new theory of evolution and natural selection as described by Charles Darwin.  After World War II and the atrocities of the Holocaust, much novel writing and movie producing of fresh or derivative works were tailored around the Nazi model.

Not until after the Watson and Crick model of the DNA molecule was presented in 1953 did fictional stories develop based on the mechanism of eugenics–  the DNA molecule itself.  As the boundary between fiction and non-fiction started to erode, stories took an eerie course through the land of make believe and reality, as for the first time, we realized we can change the way we look, feel and act without sewing, cutting or breeding.

This new knowledge allowed Dr. Bruce Banner to screw up his DNA with gamma radiation and for Khan Noonian Singh to nap in a sleeper ship for 300 years before taking over the Enterprise.  But true to the liberal arts, we all know that the Hulk won’t hurt anyone who doesn’t deserve it and that Captain Kirk will eventually slip a control rod from an engineering console to beat the shit out of Khan.  Why?  Because we fallacious, imperfect humans win in the fictional, fantasy world; Bruce Banner’s compassionate soul and James Kirk’s fiery, if not flawed, determination or “inner madman” protects us from a world of superior beings.

More frightening than any Hollywood production is the notion that eugenics and the sterilization of human beings was not a Nazi invention, but was imported by Germany from none other than the United States.  Decades before Hitler’s antics, the U.S. practiced ethnic cleansing by restrictive marriage laws, “segregated” colonies and sterilization.  Laws for forced sterilizations, forced segregation and restrictive marriage laws were enacted in over 27 states in the union, and nothing prohibits the practice of eugenics today. 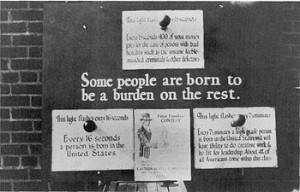 The idea of ridding the world of unfit humans was funded by some of the world’s leading financiers, such as the Carnegie Institution, the Rockefeller Foundation, and the Harriman Railroad.  Scientists in noted institutions like Stanford, Harvard and Yale all studied and supported race theory and race science.  In fact, the Rockefeller Foundation funded several eugenics programs in Germany before World War II, including one that with Josef Mengele just before he went to Auschwitz.

California’s eugenics kingpin and founder of Sacramento State College, C.M. Goethe, grabs the all time 20th Century Adolf Award in eugenics.  Besides establishing a program that helped California lead all states in forced sterilizations (over 20,000 before 1964), Goethe proudly told a colleague:

“You will be interested to know that your work has played a powerful part in shaping the opinions of the group of intellectuals who are behind Hitler in this epoch-making program. Everywhere I sensed that their opinions have been tremendously stimulated by American thought . . . I want you, my dear friend, to carry this thought with you for the rest of your life, that you have really jolted into action a great government of 60 million people.”

Naturally, California is not going to let a little Nazi history get in the way of staying in the lead as the state prison system spayed 148 unwilling women inmates between 2006 and 2010.  So pull up a chair, grab your knife, fork and a cold glass of orange juice any time of the day– it’s not just for breakfast anymore!