The Eyes Have It!

Thank God for college surveys and studies!  Without them, life is not worth living!  Harvard is the leader of such copious investigations and once such work is released, well, the world is a much better place.

The Harvard School of Public Health College Alcohol Study (CAS) was started 1992 and continued for 14 years.  The conclusion?  Ban beer kegs at college dormitories and fraternities and the general matriculating student body will sober up.  It also coined a new term, binge drinking, so that if you really aren’t an alcoholic, but drink up to four beers at a sitting, you too, can be saddled with a pejorative label like real drunks.  Problem solved!

Now students buy cases of beer, tape black trash bags over the windows, and slosh down the cans or bottles with a couple of friends in a couple of hours as not to get pinched by an undercover cop.  They’re sloppy drunk, but at least they don’t get caught.  And as a bonus, if someone stops by with a “drinking questionnaire,”  they won’t remember a thing, so after the next “alcoholic survey,” statistics should dramatically improve.

But what of the little children of the world?  Can’t we do something for them?  Well,

Cornell University’s Food and Brand Lab (yes, a Food and Brand Lab!) is saving the little tykes from the monstrous marketing techniques of cereal advertisers.  So what’s going on here?  As James Doohan of Star Trek fame would say, “It’s a ploy!”  Of course it’s a ploy, Scotty!  That’s what cereal makers do; they sell cereal!  And,by golly, Cornell caught them in the act!

To expose the crafty black art of breakfast food advertising, click the graphic on the right.  You’ll notice that Cap’n Crunch is staring a hole through the middle of your child just like Mom did you she caught you drinking milk from the carton.  Everyone in that drawing is ganging up on your kid– Mr. T, Trix the Rabbit, Papa Smurf, 3CPO and more.  You do see it, don’t you?  ‘Cause I can’t.

Cornell’s “Cereal Box” crew would have us believe that, like Leonard da Vinci or Thomas Gainesborough, industrial cereal box artists can reproduce a cartoon character whose eyes stare at you as you stroll down the supermarket aisle with your little one.

The Director of Cornell’s Food and Brand Lab, Dr. Brian Wansink, calculated the angle of the listless, two-dimensional gazes down to the tenths!  Grocery store stock personnel are apparently trained in trigonometric functions as they carefully place the cartoon characters strategically on the shelves so that it catches the attention of your little precious at an exact angle of 9.6 degrees.  Huh?!?

Pretending for a moment that such eyeball-o-metric guesstimation is accurate, consider the eyes of Trix the Rabbit below.  Take a good look at those iris-less, flat-black peepers and ask yourself which one invokes 16% more trust.  I thought so.  I don’t know what the hell this stupid rabbit is looking at and neither does your kid.  And should one of the these goofy caricatures catch the conscience of the kid, tough!  Cereal’s too expensive, too sweet and too unhealthy.  Let them eat cake.  Until next time, here’s looking a you, kid! 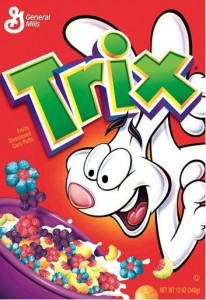 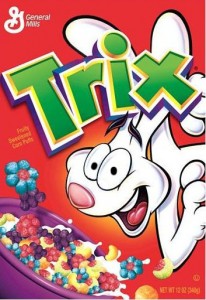