Franklin Delano Roosevelt signed the Social Security Act on August 14, 1935 which was 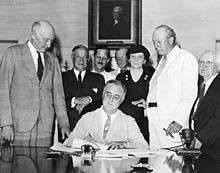 approved by the U.S. Congress as a part of a series of domestic programs known as the New Deal. Social Security was initially designed as a protection, or aid, if you will, from the uncertainties of future, particularly old age, and was initially crafted to serve the elderly, poor, unemployed, widows and fatherless children.  It certainly blossomed far beyond its original intent, as any loyal viewer of Judge Judy or the People’s Court can attest.  Arguments ensued for decades regarding the merit, even the constitutionality, of Social Security, but for most of us, it’s something removed from our pay check that may never be seen again.

The biggest question for those nearing their retirement is when to begin receiving payments, that is, should one retire and “take” social security money early, say at 62 years of age, wait until 65 or 66 for the full retirement age, or wait and get REALLY big payments at 70.  Now there’s a lot of rules and regulations regarding what you can earn and about the nasty reductions to your spouse’s benefits (if he or she qualifies) should you take an early retirement, and because of this, just about every financial analyst, columnist, and newscaster says “wait.”  “Wait” for that bigger check; it’s well worth it.  Is it?  Let’s check it out!

Bob worked full time most of his life.  He earned anywhere between $10,000 per year when he was young, to about $120,000 a year in his heyday.  Recently, he’s working part-time for a yearly salary of $25,000.  He turns 62 next year and is contemplating that question that haunts us all–  should I apply for Social Security early or wait.  He checks with Social Security and finds that if he retires at 62, he will receive monthly payments of $1336.00.  At 66, he receives $1778.00 each month.  If he waits until he is 70 years of age, his monthly “take” jumps up to about $2348.00.  Everything that Bob reads indicates he should wait.  Bob starts thinking that he is a fool for even considering an early retirement.  Bob decides to sit down and see how the money adds up in the future:

Bob decides that life is too short to wait.  And you?  What’s in your wallet?