A few weeks ago, a friend of mine sent me a link for the Darwin award winners for 2013 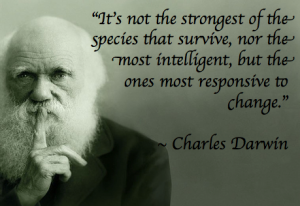 entitled “The 2013 Darwin Awards Are Out!”  Being a fan of the Darwin Awards for the past 20 years, I clicked the link to enjoy the ultimate in an evening of sadistic chuckling.  I began reading, but something was wrong.  Nothing on this list was funny nor was it well-written, which is the trademark of the Darwin Awards website.

If you’re not familiar with the Darwin Awards, it is an honor bestowed upon those less intelligent or clumsier than the vast majority of the population, and who, through some stupid act or careless event, manage to eliminate themselves from human gene pool by killing themselves.  Of course, as with any great and well-earned honor, there are honorable mentions for those talented folks who manage to survive events so horrendously capable of instant death that they are laughably entertaining as hell.

Older tales that are now included and helped spawn the now famous Darwin Awards began circa 1985 on the Usenet newsgroup.  The awards were launched online in 1993 and in 2000, a series of books were published by Wendy Northcutt.  She is responsible for the spit-and-polish macabre articles that we laugh at today.  Naturally, a big celebrity name helps promote any cause, and what better celebrity to use that of Mr. Survival of the Fittest himself, Charles Darwin.  Although Charles Darwin was not referring to a “tooth-and-nail” struggle when he penned the words “survival of the fittest,” everyone knows that there’s nothing like throwing Darwin’s name around when it comes to genetic stupidity.

The aforementioned link led me to a blog entitled, My Underwood Typewriter written, I presume, by a J.D. Groover.  This I gleaned from the URL: http://jdgroover.wordpress.com/2013/08/20/the-2013-darwin-awards-are-out/__

As I read on, it occurred to me the the Darwin Awards don’t “Come out” every year like the Emmys or the Grammys.  In fact, the Darwin Awards website is a bit discombobulated as you can see by clicking the graphic link below:

5. An American teenager was in the hospital recovering from serious head wounds received from an oncoming train. When asked how he received the injuries, the lad told police that he was simply trying to see how close he could get his head to a moving train before he was hit.

This story is actually an honorable mention from 1995, entitled “Chicken with a Train,” which was published as follows:

A Bowling Green, Ohio student Robert Ricketts, 19, had his head bloodied when he was struck by a Conrail train. He told police he was trying to see how close to the moving train he could place his head without getting hit.

The “winner” on Groover’s list couldn’t be found, either, but the inspiration for the tale may be from a collection of nominations in the 2000 Darwin Award Shorties: Stupid Human Tricks.  First, Mr. Groover’s version:

Here Is The Glorious Winner:

1. When his .38 caliber revolver failed to fire at his intended victim during a hold-up in Long Beach, California would-be robber James Elliot did something that can only inspire wonder. He peered down the barrel and tried the trigger again. This time it worked.

Now the closest story I can find in the Darwin Awards:

Robert Shovestall, 37, shot himself while explaining gun safety to his wife in Glendale, California, when he placed a .45-caliber pistol he thought was unloaded under his chin and pulled the trigger. Shovestall’s wife told police that the incident occurred after her complaints about her husband’s 70 guns prompted him to demonstrate their safety. 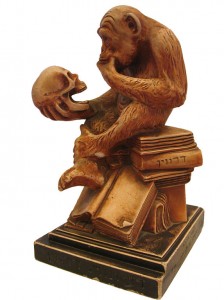 This story, however, did not garner enough votes to win an award, and as you read through the Awards, you will understand why simply putting a gun to your head is not worthy of the “nut-job” antics necessary to enter, or exit as the case may be, this holy band of genetic dead ends.  What fascinates me more, though, is why anyone might fake a list or group of stories, when the real thing is much better.  Sadly, this farce was picked up by several other sites including Joe for America (Joe the Plumber), in which the imaginary “Joe” failed to reprint the entire article, but simply listed the first eight and then posted Mr. Groover’s link stating, “Read the rest at My Underwood Typewriter.”  One comment at the bottom of Joe for America did mention that the identical list was posted on Snopes.com in 2005, which explains the faked list in detail.

It is safe to say that the “Darwin Awards are not out,” but simply evolving, one gene-splitting story after another.  As for J.D. Groover and others like him, let’s award him an Honorable Mention for his attempted murder of the Darwin Awards.