The Man in the Iron Mask!

It started with lower back pain.  The doctor and I concurred that it was probably a bulged 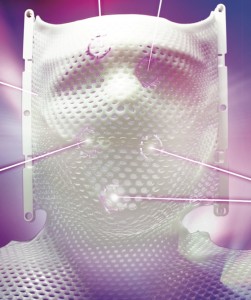 vertebral disk, and the doctor prescribed steroids and analgesics to reduce swelling and quell the pain.  After a week, the pain became unbearable.  The doctor order an MRI of the lower back, or lumbar region.  The next day, the doctor’s office called with a appointment for that evening.  After another thorough examination and a few questions, his words were surreal, “There are lesions on the spine.”  My wife was battling cancer!

Within days, we found that her left lung contained a tumor the size of a lime and that the cancer spread to the liver, brain, spine, pelvis and ribs.  The stage set, the battle was about to begin.  The oncologist decided to delay chemotherapy and begin ten (10) sessions of radiation therapy to relieve the pain in the back and stop the growth of the brain tumors. 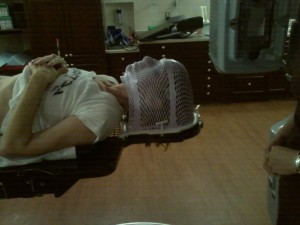 For the next two (2) weeks, my wife was involved with a very special machine piloted by a very special crew– the crew of a linear accelerator called “Trilogy.”  Linear accelerators are nothing new in the treatment of cancer as Doctors Henry Kaplan and Edward Ginzton began work on the first medical linear accelerator in 1952.  A linear accelerator, or linac, increases the velocity of charged subatomic particles, or ions, which are used to bombard tumor cells in an effort to destroy the weaker cancer tissue while limiting the damage to healthy cells.  As all technology in the past 60 years, how a linac does its job changed dramatically.  Thus, enter Trilogy!

Trilogy is a linac developed and marketed by Varian Medical Systems and is one of the most advanced machines in the world.  My wife stands next to the 8′ 6″, 4225 pound monster and stares at a high tech couch that will move and adjust itself beneath the towering gantry that will emit the tumor destroying particle beams into her brain and spine.  A sophisticated computer program will match CT scans from two weeks ago with 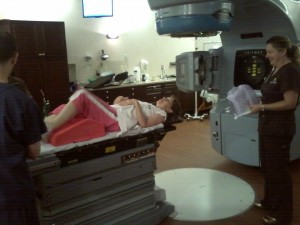 live scans on the Trilogy monitors and feed the information to a complex targeting system.  The medical staff lays her on the couch, places blocks beneath her knees and fastens her head in place with a custom stereotactic plastic mask.  A laser light cross plays across her face as the technician adjusts the couch placing the crosshair targeting system over pre-etched abdominal “tattoos.”  The technicians leave the room and enter the control room and a young medical assistant begins targeting the tumors with the alacrity of a starship navigator.  She hits <enter> and the huge gantry swings toward the floor to begin its deadly arc around my wife’s body.

Fifteen minutes later, she walks from the room, handing her mask to a technician who places the mask with all the others–  dozens of masks molded for dozens of other patients.  Patients, like the man in the iron mask, who are crimeless and anonymous, enduring a punishment that is cruel, but not so unusual.