A Spark of Genius!

The early days of electricity always conjures images of a  wind-swept, rain-soaked 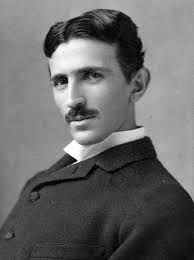 Benjamin Franklin with kite and key, or a smug-faced Edison standing behind his famous incandescent bulb.  Other names pop up from time to time during “electrifying” conversations like Galvani, Volta, Faraday, Westinghouse and even a geologic feature, Niagara Falls, but one name was always left in obscurity until about the 1990’s.  The ingenious thinking of Nikola Tesla was forgotten for close to a half century after his death.  By the turn of the 20th Century, main stream scientists and thinkers began to shy away from his discoveries and inventions, as his work and assertions caused people to think of him as more of a “mad scientist” than a serious inventor and genius.  But Nikola Tesla was much more than a mad scientist.

The tall, thin Serbian-born Tesla was a gigantic thinker ahead of his time and his pronouncement, hypotheses and theories were so far-fetched at the time, his reputation suffered as a serious scientist when conspiracy theorists and UFO advocates adopted his proclamations and used them to justify and explain bizarre events.  Many inventors and industry magnates knew better and often used Tesla to their advantage.  When Tesla arrived in the United States at the age of 35, he worked for Thomas Edison.  After reviewing Edison’s designs, he concluded that Edison’s electric motors and generators were inefficient and told Edison he could improve their output and serviceability.  Edison supposedly told Tesla that if he could do that, there was $50,000.00 in it for him, however, when Tesla revamped Edison’s designs and asked for the money, Edison bluntly told him that he was kidding.  Tesla quit Edison and formed his own company, Tesla Electric Light and Manufacturing, but he quickly went bankrupt when he couldn’t convince investors that his AC, or alternating current motors and transmission systems were superior to Edison’s DC, or direct current.  After working as a ditch digger during the winter of 1886, he started a new company, Tesla Electric Company, in the spring of 1887.

While Tesla’s work on alternating current motors and generators garnered the attention of such notables as George Westinghouse, it was his spooky predictions about “unseen” energies that enamored science-fiction buffs and earned him his “mad scientist” reputation.  Many of his claims and subsequent inventions and demonstrations of these mysterious invisible energy waves are now just part of everyday life– microwaves, lasers, wireless communications, neon lights, X-rays and radiation therapy.

In the early 1900’s until his death at the ripe old age of 86, Tesla claimed he developed a “teleforce” weapon that directed particles of charged radiation at such a rate and density, that whole armies could be stopped in their tracks and planes easily knocked from the sky.  The press corps first deemed it a “peace ray” due to its deterrent nature, but later adopted the more racy “death ray” moniker.  At a luncheon held in his honor in 1937, he claimed he built one, used it and would soon offer it to the world.  He died five years later, never 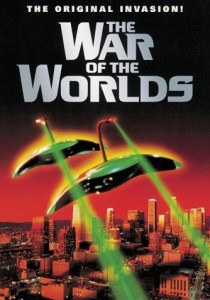 releasing a  “death ray” or any notes offering any aid in constructing the device.  Whether H.G. Wells’ Martian “heat ray” in War of the Worlds, published in 1898, was any inspiration for Tesla is unknown, but authors and Hollywood producers were no doubt influenced by Tesla’s insight as seen in the movie version of War of the Worlds, the movie The Day the Earth Stood Still, and the TV series Star Trek.

Although Tesla committed his “death ray” plans to memory to thwart industrial thievery, one Tesla experiment, bordering on the outer fringes of science fiction, is well documented.  Tesla believed that electrical power could be distributed to homes and industry through one wire while using the earth as a conductor.  In his lab in Colorado one evening, 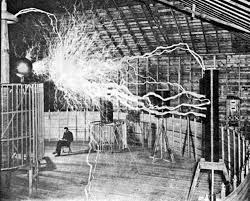 he produced artificial lightning up to 135 feet long.  The multimillion volt discharges produced thunder that was heard 15 miles away, while people walking along the streets witnessed sparks flying from their shoes to the ground.  Sparks flew from water faucets, horses bolted when metal shoes were electrified and butterflies were witnessed flying in circles surrounded by halos.  The earth as a conductor was indisputable.

Despite over 300 patents and inventions for radio, electrical transmission, and an aircraft that lifted from the ground vertically, Tesla died broke and alone in a hotel room in New York.  After his death, the FBI ordered the Alien Property Custodian to seize all of his belongs, including any drawings or notebooks of his work.  This was done despite the fact that Tesla was a naturalized American citizen, but apparently the U.S. government was much more interested in his work after death than it was during his life.  Was the U.S. interested in the “death ray?”  His work involving earth conductance?  Or his fantastic claim that he could distribute ordinary electrical power by practical methods through thin air?  Whatever the reason, the government officials probably found little of value since Tesla committed most of his work to memory.  But . . . what if?  What if the conspiracy theorists’ and UFO proponents’ legends about Tesla’s work is correct?  The world will never know all that Tesla really knew.