Bigger Is Not Always Better! 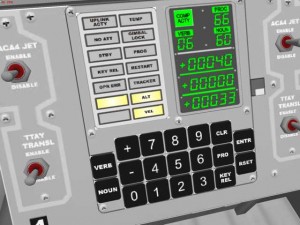 A few weeks ago, my daughter asked me if I knew the size of the Apollo 11 computer. We were chatting with a group of folks about cell phones, and remarking on the constant upgrades regarding the size of today’s computer memory and storage capacity.  I asked her if she remembered her first computer which held 40 megabytes of information.  It was smaller than that, I told her.  I asked one guy in the group, who was taking pictures with his cell phone, how much memory was in his phone.  It held three (3) gigabytes of information, he replied.  Could the astronauts of today land on the moon armed only with a cell phone?  I’m afraid not!  Comparing the 1969 Apollo 11 computer to today’s cell phones is not fair.  While today’s electronic equipment is far more sophisticated and performs infinitesimally more tasks, none would do the job that was specifically designed for the Apollo 11 computer–  land a spacecraft on the moon.

The computer on Apollo 11 could multi-task 8 jobs at a time, which by today’s standards is not a very large deal, but was mind-boggling in the 1960’s.  Bill Gates system of using “windows” and a chip that could fool a computer into thinking it was doing one task while actually performing a dozen or more was far on the horizon.  But long before Gates, the Apollo computer did what the Windows operating system can’t do.

Most of us are familiar with software heavy programs that stall our computers and require opening the Task Manager to shut down a program or even requiring us to “reboot” our machines.  And if the power goes out, well . . . all is lost.  When the Apollo Lunar Guidance System computer overloaded, it rebooted itself, prioritized the data, and processed the most important jobs first.  How much would you pay for a computer that rebooted itself and ignored unimportant data?

While the LGC (Lunar Guidance Computer) was incredible for its day, keep in mind that no software programs were written yet.  For the first time in history, a machine was built that would accept instructions, store them on a “rope” memory system (no hard drives), and perform the mathematics as required.  Software was written from scratch . . . no internet, no computer languages or websites to look up to help develop the code.  The MIT experts who worked on this software have since stated that if they knew how far advanced such software was at the time, they probably would never attempted it.  Fortunately for NASA’s space program, ignorance is bliss!

The fact that Apollo’s LGC could reboot itself proved invaluable when the computer became overloaded on the landing module during the Apollo 11 flight.  The success of the Apollo 11 moon landing was due partly to the astronauts distrust of engineers and technology starting with the Mercury space program. Designers felt that the astronauts were pure passengers and that calculations and automation alone would carry the astronauts into space and safely home again.  Since the astronauts were essentially jet test pilots, they were familiar with technological failure and the value of the human element in airplane flight.  The first American spacecrafts, the Mercury capsules, were designed with no controls and a “bolted” down hatch.  The astronauts protested.  First the hatch was attacked by the spacemen, who felt it necessary to be able to unlock the hatch and escape the vehicle.  When the designers refused, the astronauts threatened to sabotage the program by refusing to fly.  Needless to say, the astronauts got their way.

The pilots attitude proved invaluable time and again, as certain events during space flights did not always go as planned.  The Apollo 11 flight was no exception.  During the separation of the lunar lander, the cabin was not fully depressurized causing a “champagne cork” pop that, unbeknownst to astronauts Armstrong and Aldrin, threw the lander four miles off target.  That fact would be of major concern just before the lander, nicknamed the Eagle, was scheduled to touch down on the moon.  As the lander approached the moon, the tiny Apollo computer overloaded.  First a 1202 alarm sounded, indicating that no core sets were available, or that the computer could no longer process additional information, so certain functions were being dropped.  Much closer to the moon a 1201 alarm sounded due to the fact the computer was overloaded from processing unneeded radar information.  The computer rebooted, dropped the radar information and continued to process important tasks, like steering the descent engines and continuing to display data to the control board.  Suddenly, when Armstrong looked out the window, he noticed the module was headed for a huge crater.  They were off target by about four miles, probably due to the separation “pop” mentioned earlier.  In the spirit of the Mercury astronauts, Armstrong switched off the automatic pilot, continued to fly over the monstrous crater and landed the craft manually.

Yes, bigger is not always better when it comes to computers and while our intellect seems to grow ever dimmer in the shadow of the onslaught of artificial intelligence, we can only hope that like Armstrong on that summer day in July 1969, we can flip the switch of technology to “off” and steer our lives and, indeed, our world manually.