Tricks of the Trade and Rules of Thumb! 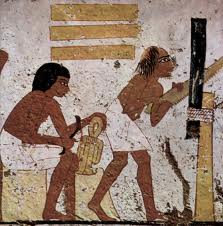 Even in a high-tech precision world, not much is accomplished without a few “tricks-of-the-trade” or “rules of thumb.”  Why?  Because, despite mechanization and computer manipulation, there is a real world filled with real people who are tasked with getting things done.  Tricks of the trade are special skills or special knowledge in a trade or profession that allows one to perform at a faster or higher level.  A rule of thumb allows someone to determine a value or recall something without laborious measurement or calculation.  A rule of thumb is easy to learn and easy to apply.  You might say tricks of the trade come from experience and rules of thumb are educated guesses, but a little of each is necessary for both.

Tricks of the trade, as you might guess, stems from the fact that a certain amount of experience is needed in skilled trades and mechanics to perform at a high level.  Many of these tricks are a result of trial and error, like learning to cut plywood on a curve with a straight-bladed power saw.  A carpenter might use a tool designed for that purpose first, such as a coping saw or a saber saw, but soon learns that cutting large circles or arcs requires more control and accuracy than those smaller tools can provide. Cutting large arcs or circles in plywood is a good example.

Patterns, dead men, and nails are useful aids in carpentry trade trickery, especially if you are working alone or are limited in personnel.  The art of scribing is particularly useful in carpentry, holding a pencil at the end of a rule or tape, and sliding the other hand along the material or workpiece edge to draw a straight line.  This shortens the process of marking and using a straight edge or chalk line to cut or mark lumber or plywood.  My favorite was the use of a pattern to mark repetitive lengths of lumber, like studs, headers, and rafters developed by “saw man” Jack Reed.  Jack always pre-cut lumber for houses so that when a framing crew came out to the site, all the lumber for rafters, joists, windows and doors were cut and ready to fasten together.  Some of this work required that the end of the pattern was flush, or even, with the end of the lumber.  Since Jack usually worked alone, he walked from one end of the cutting piece to the other– once to flush the end– the other to mark and cut.  Usually Jack asked an old friend, Charles Lee, to assist by making sure the boards were even, or flush, saving Jack a lot of time and energy.

No one ever called Mr. Lee “Charles” as his nickname was “Hokey.”  Hokey Lee was a descent carpenter and reputed drinker all his life.  He was tall, thin and weathered after forty years of construction work, but he worked hard and a very affable man.  Everyone liked Hokey Lee especially after work when Hokey would stop at a bar on the way home and buy everyone a drink.  Jack Reed, on the other hand, liked to stop for a drink on the way to work, more than likely to visit his friends who talked a local bar owner into opening six  o’clock in the morning.  Hokey liked working with Jack, as Jack would be on the job site at dawn and just the two of them would work as the sun rose.  Jack liked working alone and never wanted anyone’s help, save for using Hokey to line up the lumber.

Jack Reed was a short, gruff character with a huge beer belly.  He didn’t talk much, never smiled and was efficient at reducing a lumber pile into a well-organized stack of framing material.  Everybody knew Jack and they knew if they put the wrong piece of cut lumber in the wrong place, they faced the threat of Jack Reed slicing them up one side and down the other with his Skilsaw.

One summer day, as I drove out to one of the houses my crew was framing on a development, I saw Jack, saw dust flying, working alone next to a disassembled pile of lumber.  I rolled down my window and shouted,

“He right here!” Jack answered, not looking up.

“Right here” he said, as he pointed to a little block of wood tacked to the end of a jack stud.  I started laughing when I saw a small block of wood nailed on the end of his pattern, hanging down enough to allow him to pull the pattern forward until the block was tight against the lumber piece to be cut, eliminating the need for Hokey Lee to help flush the ends.

“I call it a Hokey Lee!  It doesn’t give me any shit and I don’t have to buy it beer!” Jack said without lifting his head.

That was over forty years ago and I remember the scene vividly.  It’s amazing how such characters affix themselves into our memory permanently.  Every time I use a static device like this–  a dead man, block of wood, a nail as a temporary ledger– I call it a Hokey Lee to this day.  A good rule of thumb?  Remember the little people in your life.