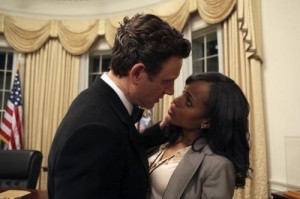 While watching ABC’s political drama, Scandal, I realized that former vice-presidential candidate, Paul Ryan, is a fan.  Apparently, he tunes in to the hit show gathering tips and tidbits on creating a national budget from fictional President Fitzgerald T. Grant.  The Hollywood President won his election by promising to reduce the federal budget by 4.5 trillion dollars within the next ten (10) years.  Ryan, the House Budget Chairman and failed veep candidate, did Scandal’s leader of the free world one better by proposing a budget cut of 4.6 trillion dollars. Back in August 2012 (and before the election), Ryan proposed a 4.8 trillion dollar budget reduction, but after season two of Scandal, Ryan adjusted those figures to be more in tune with the TV viewing public.  Coincidence?  I think not. 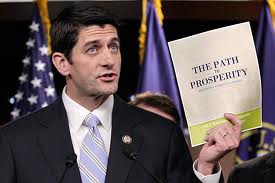 Scandal, ABC’s hit show about an alcoholic, womanizing U.S. President and his consort, Olivia Pope, is the perfect soap opera for Washington politicians, as it contains a lot of fiction and very few facts.  What better source of information does a Washington insider need on campaign tricks, cheating, and budget proposals than the creative writing of Shonda Rhimes and her crew.  And what better fiction than reading Paul Ryan’s budget.  The Republicans even named the budget calling it The Path to Prosperity: A Blueprint for American Renewal.  Sounds very Hollywood to me.  Originally it was called, The Path to Prosperity: Restoring America’s Promise, but oddly enough, the name changed again during the second season of Scandal.  The Democrats call the budget by some other names, none of them very flattering.

If Paul Ryan wishes to use President Grant’s numbers to reduce the budget, perhaps he should look less at Fitzpatrick Grant’s budget and more toward Ulysses S. Grant’s.  First of all, the middle initial “S” in Ulysses S. Grant stood for “scandal” during his presidency with no less than eight major outrageous problems, including the Black Friday Gold Panic, the New York Custom House ring, doubling his salary in the Salary Grab, and the Sanborn contracts.  Like the Hollywood version of the Commander-in-chief, Ulysses Grant was a clinical alcoholic, but his budget figures are really something on which both Democrats and Republicans can agree.

Total government spending for Grant’s first year in office was a paltry $334,000,000.00 with a national deficit of only $96,000,000.00.  Ulysses could never comprehend a trillion dollars, let alone a proposal to reduce the budget by trillions of dollars.  But let’s examine what bang Americans got for their federal bucks back then.  Well, anything spent on government pensions?  Nope!  Education?  Nope!  Health care?  Nope!  Welfare?  Nope!  Defense?  Yup, a total of $108,000,000.00!  Today, that’ll buy the Army 6400 drip pans for the transmissions on Blackhawk helicopters.  Last year, however, the Army only needed 6.5 million dollars worth, so back in 1870, Grant could have ordered 15 Blackhawks with the money leftover.  And you thought today’s Army wasn’t frugal.

Perhaps Paul Ryan’s budget is on the right track after all, placing the burden of transportation, education, pensions and health care on somebody else.  Why should the federal government be responsible for such onerous money-sucking tasks?  There’s got to be plenty of money at the state and local levels, right?  That way, we can enjoy not having those things that weren’t available anyway during President Grant’s administration, like home refrigerators and paved roads.  Save the Federal dollars for what we do best–  making and dropping bombs.  You don’t need roadways or an educated populace for that.  In fact, it’s better if the nation’s constituency is ignorant and home-bound, and it would certainly add a new dimension to the term “March on Washington.”  And if the politicians are lucky, it will rain when anyone wants to go to Washington to protest.  Dirt roads turn into muddy roads. 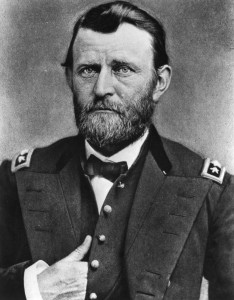 "Some Blackhawks would put a smile on my face!"

One final note, do you really think any Geico customer would really be happier than Ulysses S. Grant with 15 Blackhawk helicopters?  To find the answer to this, and other questions, like “What will Paul Ryan do next?,” tune in to this week’s episode of ABC’s Scandal.