In 140 BC, politicians in the Roman Empire doled out cheap food, drink and 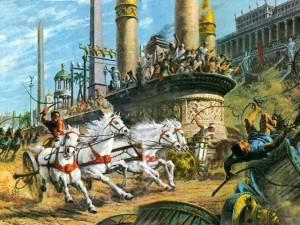 entertainment to the general populace to assure the loyalty of voters, thus guaranteeing their rise to power.  This was described by the Latin term, panem et circenses, or bread and circuses, and became synonymous with any type of superficial appeasement, particularly in a political arena.  Today it is generally accepted as a description of a morally bankrupt citizenry that values not any civic or public-related duties.

It’s not a stretch of the imagination to think that the nations in the developed world are morally bankrupt.  Consider what pushed us to that precipice.  Our thinking is corrupt.  One needs only to watch an episode of Judge Judy or The People’s Court to realize people don’t think like they used to and whether you blame it on politics, the economy, guns, TV, or movies, one thing is clear– fewer and fewer of us are social creatures with regard to face-to-face confrontations or facing our responsibility.  What is the magnet that spun the moral compass in the wrong direction?

Conservatives are quick to point out that there is not enough God and Country in our nation and the world, and while it seems God’s in no hurry to intervene, when he (or she, you never know) checks the internet, he probably notices there are enough “barefoot, pregnant, and in-the-kitchen” 1950’s nut jobs extolling all the benefits of a daily dose of God, guns, and gravy.

Liberal viewpoints are just as bad, eschewing a Marxist-type attitude that human needs are subjugated by capitalism, and with that our neighborhoods are a patent blend of rich, politically connected fat cats snuggled firmly in the warm nest of upper middle class McMansions.

Whether you’re a liberal and believe individuals are greedy and selfish, or an “I’ve got mine” conservative who thinks the world is replete with mindless sheepheads, it is clear that civilization never was nor ever will be civilized, and while we can blame Republicans, Democrats, guns, TV, Moslems, blacks, whites, video games or the man-in-the-moon, human beings know it’s never going to get any better.  Why is this?

I believe it’s our narrow perspective of what is right and wrong within a human lifespan.   We are indoctrinated by those around us as to how we should think and feel.  We’re regaled with tales of a few generations that proceeded us without regard for some “minor” embellishments about the “good old days.”  I’m reminded of the Reagan funeral and how he was presented to the present generation as a political Godsend.  Reagan was much more impressive in death than he was in life.  I watched the television in amazement as narrators described the “strong” economy, all due to the Presidential wisdom that was Reagan.  That’s not the economy I remember.  I was there.  But the rhetoric affected the generations that weren’t there.  So it is with all propaganda and storytelling.  After the turn of the century, we experienced two world wars and from the 1950’s through the 1960’s, we experienced a sense of morality, almost a self-righteousness in the United States.  Hell, we bailed out the world, saved France, defeated the Nazis and the Facists!  We were the good guys and we offered the world order.

It different now.  First of all, there’s a lot more of us, and that’s where the problem begins.  Like a Petri dish of bacteria, we will grow, take, consume, eat, discard and deficate until there is no more– no more materials, minerals, food, land or air.  Like an overcrowded, colony-ridden container of bacteria, we will breed and grow until we die off.  And we won’t be gone completely.  A few  will remain.  A few will rebuild, restructure and start the cycle all over again, until . . . until it’s time to die back again.  We may be in the final stages right now.  Actually this is the best time of the species life cycle.  A time when we can enjoy our bread and circuses.