Make up your mind to resolve!

Make a motion, make a resolution, Trenton makes the world takes.   Between the slackers 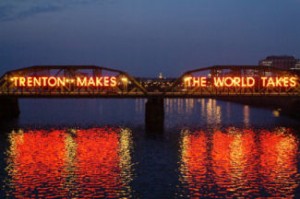 and the fakers is a world full of makers. No movers or shakers, though.  No one resolves anything anymore.  They make it!

Every year at New Year’s, millions of people vow to change their ways, clean up their acts, or kick some undesirable habit.  They may want to lose weight, stop smoking, or cut down on drinking alcohol, but for whatever the reason, be it just for New Year’s alone, they resolve, I mean, they make resolutions to change their ways.

New Year’s resolutions are not a new thing, as ancient Babylonians promised the gods to return borrowed objects and to pay off debts. Romans, Greeks, and medieval knights all chatted up their gods, too, with promises of good behavior and altered lifestyles.  As history witnessed, most of these promised are in vain.

Perhaps one resolution might help keep the promises given by modern day optimists, and that is to stop “making” resolutions and begin “resolving.”  The term “making a resolution” seems more like an object, a cookie perhaps, that we bake in the oven, drop into a tin, and squirrel away for the rest of the holidays.  Resolve not to say or write “making a resolution.”  Other resolutions might include not to use the incredibly stupid sentence “I make a motion.”  A term gone viral in the last three decades, no one “makes” a motion at a meeting . . . they move. Furthermore, those who do move, or more likely make a motion, at town meetings probably should move.  Move out of that town.

Resolve this year that if you make something, make up your mind . . . make up your mind to make things with your hands and to use your mind for thinking, think before you speak, and think about what you’re saying.  Start leaving the ‘t’ out of often (pronounced [AWF-in], and stop saying off-ten!  Resolve to keep contractions the simple things they were designed to be in the first place.  Stop pronouncing “didn’t” did-dnt, “couldn’t” could-dnt, and so on.  These words are one syllable, not two.  If you can’t say “didn’t” in one syllable, then say “did not.”  Also, while I’m dissing “d’s”, let’s say “stu-dent” and not “stewed-dent.”

Resolve to expand your mind!  Watch your local weatherman or woman, newscaster, sportscaster and listen to how many mistakes they make on TV.  They get paid big bucks to talk, but don’t (one syllable now) know how.  Listen to how many adverbs or adjectives they string together.  Listen as they say, “This rain system should move out of here fairly quickly!”  It’s just awful.

Finally, resolve to be a better person inside.  Pack up those old prejudices and see others for what they know and do.  Stop judging them on names, color, religion or party.  Talk to people in the elevator.  And if you want to smoke, cuss, drink, or you’re hungry and want a snack, resolve to make a mess of yourself.