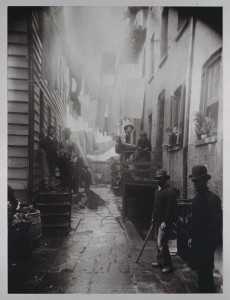 Christmas is my favorite time of the year.  As the days shorten and the nights grow longer, we all need something to cope with the lack of light and the cold north winds.  Christmas is bright, warm and a time of year when friends and enemies put differences aside to revel in fantastically prepared victuals and sallies of wit beside a warm fire.  One tradition in our family is to often re-read or even recite the following poem, which was found by my grandmother over 80 years ago.  It is not a bright and cheery tale, but a step back  from the trappings of our commercialized holiday cheer.  It is a story centered around a small shoe shine boy trying to survive the winter in a city at the end of the Nineteenth Century.  My family now shares this tradition with you by presenting, Little Tim’s Christmas . . .