We are born and then we die.  In-between, we fill our lives with what we believe is 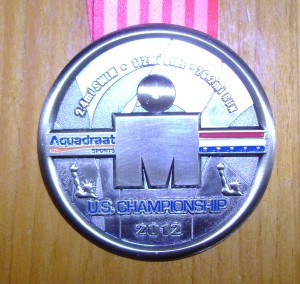 important and with what we need to get by.  Some people are born twice as they “find Christ,” or experience a near-death phenomenon.  I witnessed many rebirths on Saturday August 11, 2012 at the U.S. Championship Ironman Competition in New York –  over 2500 of them, my daughter included.  One family suffered tragedy as a loved one died shortly after he was pulled from the Hudson River.  Bike crashes along the Palisades Parkway were abundant bringing disappointment and anguish to those who worked so hard and saw their dreams dashed on the pavement in a mass of shattered equipment and blood.  Many others just never finished.

If competing in a triathlon that spans a distance of 140.6 miles sounds like a stupid idea, it is . . . but it is a spectacle to behold, also.  Watching thousands of athletes push themselves through a masochistic day of hell that’s called “ironman” is an emotional and physical milestone that you cannot experience anywhere else.  And these were real athletes.  Unlike many events I’ve watched, such as marathons and half-marathons, there were no fat folks, ladies with flabby arms wearing cute little shirts, no guys dressed like Superman or Batman, and no jugglers.  This was an expensive event with high-priced equipment and hardcore competitors.  I saw not one weakling in the bunch.  I didn’t see a lot of spectators, either.

Watching sports is an American way of life, even a tradition.  Football, baseball and basketball are spectator sports, and are wildly successful due to this fact.  These sports are dedicated to their fan base– stadiums and arenas are erected, the games are televised and a lot of merchandise is developed to support these sports.  Other sports naturally draw people to watch as a matter of fascination and curiosity.  The marathon, along with half-marathons and a number of shorter races, is that type of interesting event where cheering fans line the streets and encourage the athletes along the way.  The majority of fans, however, are friends and loved ones who are passionate about the sport and the athlete. 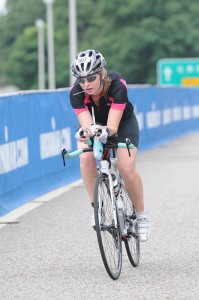 Athletes of all stature play to the crowd.  Some show it by smiling and waving; others run or bike just a little faster.  When others are there, the athlete feels a bit more secure, a bit more worthy.  Apparently, the promoters of the U.S. Championship Ironman didn’t get that.  From the first postings on the web, they let the world know that you couldn’t follow an athlete on this prestigious journey.  It was compounded by the fact that spectators were not allowed on the roads and highways closed to automobile traffic.  All the trails along the Palisades cliffs were verboten! They encouraged fans to pay $50.00 a piece for ferry tickets, which sold out immediately, stating this was the only way you could possibly see the swim portion of the race.  And people swallowed it.

Ironman isn’t just a race, it’s a franchise.  Like all franchises, it’s good at making money.  I attended a half Ironman event (a paltry 70.3 miles) and was not too impressed with the way things were run.  I was even less enamored with the handling of the big daddy event totaling 140.6 miles.  Through the fanfare and advertising, something is missing in the carnival atmosphere before and after the race and you need only to compete or chase down an athlete to feel it.  Volunteers that are not athletes and rude bellowing security personnel lend to the uncomfortable feeling that participants must overcome more than a difficult 140 mile plus course.  They must do without their family and friends . . .  personal fans who spent countless hours to help train, feed and guide these athletes . . .  fans who just want to see the fruits of their labor and support both their athletes, while also cheering on strangers.

Triathlon is like no other sport regarding competitors.  Yes, individuals sign up for a race and try their best, but they support each other.  In the end, there is no trash-talk, 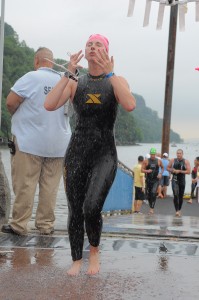 fist-fights or hard feelings.  Everyone is glad if they make it through.  At the writing of this article, the registration for the 2013 U.S. Championship Ironman is suspended.  The promoters assessed the many complaints they received from the athletes about how things were run and the cost of the event.  On that long list was lack of spectators. Ironman athletes work extremely hard and they compete in a self-made purgatory.  They want us there.  Don’t make them swim, bike and run alone.