Shave and a haircut, two bits! 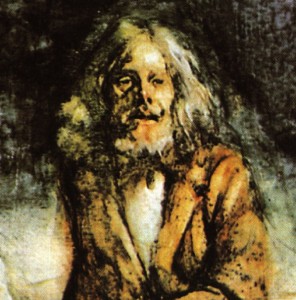 about hair, or even the lack thereof, but hair is incredibly feminine also.  Hair is versatile, varied and beautiful in the right places and kept in the right way.  Who’s more handsome than a young man with a thick frock of hair, or a middle-aged man sporting a carefully trimmed, salt-and-pepper beard?  On the feminine side, it’s the long, flowing strands or carefully braided tresses that divert our attention.  Yes, hair can be a beautiful and desirable thing.  But whether you’re blonde, brunette or redhead, there is a dark side to hair.

As we age, that evil side comes out!  We quickly transform from a young, vibrant Princess Leia to an old, mean Darth Vader, as our hair becomes brittle, crooked, and colorless.  No longer do the fine silky frocks and tresses flow magically from little factories we know as follicles.  Instead, a bevy of useless cylindrical, keratin filaments are produced.  Some of these magical follicles shut down, leaving us with brainy-looking foreheads, or worse yet, with prenatal skulls.  Follicles that live produce gray, yellow or white crooked strands of hair, adding new dimension to the term “hoary.”  These are formidable opponents as we battle them almost everyday by washing, combing, brushing, and coloring.  We twist them, and turn them, and blow dry them to keep up with whatever hair fad is now on the market.  But the worst of all are the newly emerging critters . . . the unwanted hair.

Unwanted hair affects both sexes, but it seems this is one arena where the men win
“hands down.”  Women may shave legs, lips and armpits, but these are common areas where the growth of hair is considered normal.  For men, the period of accelerated hair growth resembles the transformation from man to werewolf.  Hair barges out of every orifice!  Unfortunately for the general viewing public, the hardest hit is the ears and the nose.  Ears are difficult appendages to groom.  First of all, you can’t really see into your ear, but never fear, the hair follicles are sympathetic!  Those clever little follicles in the ear canal, or acoustic meatus, apparently signal those embedded in the pinna (those big fleshy flaps on the side of your head) and they too join in the fun. Most older men will notice this as they go for a walk on a sunny day.  As they look to the ground, they see a shadow of what appears to be a tree branch behind their head, but as they look around, no tree. Proceeding to the nearest men’s room, they glance in the mirror and there they are . . . like VHF antennae, long crooked hairs protruding from each precious pinna.

The big winner in the gross hair department is the nose.  Most people don’t like their noses, so when a couple of hedgerows begin to emerge from each nostril, the morning shuffle to the bathroom is an exercise in horror.  Nothing wakes you up (or sobers you up) better than ugly hairs growing from an already unpopular facial protrusion.  The pageantry doesn’t end there for as men age, the nose hairs turn snowy white, putting on a great show at business meetings, cocktail parties and other social functions in which old men probably shouldn’t stick their noses.

Curious as to how this happens to old men, I did a little research into the science and 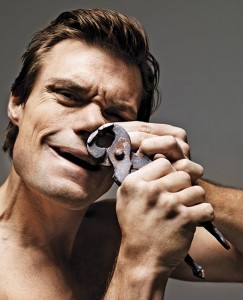 medicine behind this phenomenon.  Pay attention biology masters candidates and pre-medical students!  After hours of searching the votes are in and the results are clear!  Nobody knows!  For now, we men (and some women) are doomed to hack, cut, shave and trim until further notice.  Some advice when buying nose hair trimmers.  Think Jurassic Park, because you’ll need a trimmer that can knock down a T-rex!