I’ll drink to that! (or how I changed the drinking world)

I’m responsible for Beirut!  No, not the city in Lebanon, but the 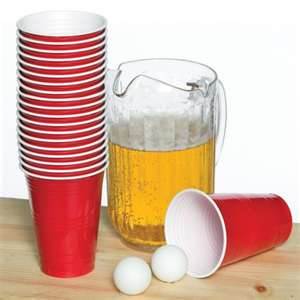 infuriating beer-gulping drinking game where contestants stumble up to a ping-pong table and heave feathery celluloid balls into plastic beer-filled cups to . . . well, to get drunk, I suppose.  Some time between the 1980’s and common sense, college matriculates decided that drinking games should be designed to get dead bang, out-but-out, fall-on-your-face, sloppy drunk.  And I’m embarrassed to admit I am somehow a part of it.  But not for the reasons you might think!

First of all, I’m not a “Carrie Nation,” hatchet-wielding teetotaler who believes that naturally-brewed spirits are evil, and in college, I was considered a “high level” imbiber.  And I’m not anti-Beirut because I think the state of “sloppy drunk” isn’t a viable pastime.  It’s more the way the game developed, starting with the advent of “beer pong” and “quarters” in the mid-seventies, to what I saw as a lazy man’s (or woman’s) drinking game with a get drunk now strategy during the 1980’s.

The eventual development and popularization of the game actually grew from a tough, keep-the-fraternity-clean-and-in-one-piece policy adopted by the Nu Deuteron Charge of Theta Delta Chi Fraternity at Lehigh University during the early seventies.  Dear Brother Page Slaughter passed quietly into the Omega Charge and left “the Charge,” as Nu Deuts call it, about ten percent of his former worldly worth.  In Nu Deuteron fashion, his oh-so-worldly housekeeper was graced with the rest.  In short, the stately manor was completely refurbished and refurnished to it’s original stately manner.  The group of dedicated brothers that now occupied the house vowed never to let another group of hooligans destroy their beloved Charge.  The fraternity was thoroughly cleaned twice a year, once before Homecoming and again at Parent’s Weekend.  Walls were washed, carpets cleaned and minor maintenance performed to keep the Charge in spectacular condition.  Coupled with a system of weekly assignments and monetary fines for the breaking of objects and behavioral rules, the fraternity looked like a sorority.

I was appointed House Manager in 1974, at a time when the system of maintenance and repair was at its peak and there was little to do but routine tasks, such as assigning clean ups and assessing fines, making me as popular as the University President on a pot bust.  My first act was to protect one of the frat’s prize possessions–  the vintage Brunswick billiard table.  Stiff fines were enacted for spilling beer on the table, and even stiffer fines for placing a beer on the rail of the table.  Particularly apathetic to the new rules was a new table tennis cult brewing among the membership.  They wanted to play “ping-pong,” and when the brothers voted not to buy a contraption called a ping pong table, several of the zealous furniture ball bashers constructed a table from two sheets of three-quarter inch plywood . . . a table they plopped across the 1944 Brunswick pool table . . . a fact I didn’t know about until I strode into the game room for my regular 4 o’clock date with my newly-surfaced, green-felt beauty.  Like Jesus chasing the money changers from the temple, I rushed in.  “Get out!” I screamed, “Get this piece of shit off my table!”  The two paddle-handed merchants in question wisely fled, cleansing my temple.

To say the least, the flat top table didn’t set well with the old pool playing guard in the brotherhood, which led to a collection among the table tennis set, which led to a new ping pong table resting in the middle of the game room.  Happy days were here again, as delighted “pongers” could rest their beers anywhere they wanted on this amusement ride without fear of fines or other repercussions.  We smug billiard players racked our balls each afternoon, laughing and ridiculing the table tennis crowd and in our ardor to condemn, we never suspected that we were so, so blind.

It started simple enough.  Occasionally a ball overturned a beer cup, spilling its contents across the table and dripping to the floor.  In rare instances, a ping pong ball would slip into a cup, delighting both the crowd and the participants.  Perhaps it was our cat-calls or maybe our laughing about the stupidity of it all, but in defiance, some genius thought it would be great fun to put cups into the field of play and try to hit balls into beer-filled cups.  Beer pong was born!  When balls were in short supply or no workable paddles were left, some inventive brothers dug into their pockets and bounced quarters into the cups.  One game becomes two and so on.

Since it was hard to score points, most brothers got drunker 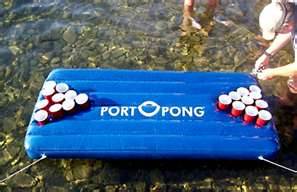 watching the game than playing.  By the middle of the 1980’s, a solution was found.  Cutting any hint of skill and eliminating the paddle man, there was only one thing left to do . . . just throw the balls into the cups!  Beer pong finally evolved into a full-blown, beer-swilling bomb fest!  A new “toss and splash” drinking game crawled from the fraternal primordial soup killing more livers than the real Lebanese Civil War. Beirut was ashore and breathing all on its own! 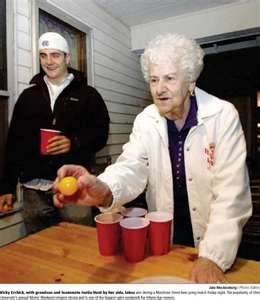 Fun for all ages!

We, the old-fashioned beer drinking game and billiard players, never foresaw the impending doom . . . the uprising of the X-generation drinking game that now obsesses the Y-generation.  It is a world now inundated with echo boomer marketing campaigns to sell beer pong tables, tee shirts, and floating game sets for Beirut tournaments in your backyard pool.  Beirut is now the family contest that’s fun and excitement for all ages.  In retrospect, I was wrong. Maybe a few spilled beers on a pool table wasn’t the tragedy I made it out to be.  Perhaps we older brothers should have taken the young ones under our wing back in the seventies and eighties, taught them right from wrong, explained the real difference between billiard balls and ping pong balls, laughed, hugged, spilled a few beers, and imparted our knowledge of drinking games the way General George S. Patton conveyed fighting the Nazis to his troops– no one ever won a drinking game passing out for his country.  He always won a drinking game making the other poor bastard pass out for his country.