Cavalcade of the “Has-Beens!”

Celebrities love hawking reverse mortgages . . . Robert Wagner, Fred Thompson, Henry Winkler, Peter Graves and even a genie, Barbara Eden.  Why do these famous folks feel that reverse mortgages are the best thing since eating sliced white bread in an oxygen tent?  The best answer might be “Because they’re getting paid for it!”  But then again, celebrities get paid for anything they do.  That’s why they’re celebrities!  I would think that anyone on this list of A-rated endorsers don’t need to consider a reverse mortgage.  So can we believe they are truly sincere?  The best answer here is, “Probably not!”  These old stars don’t know anything about a reverse mortgage. 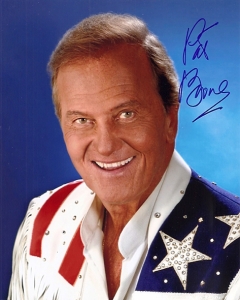 No American flags harmed while making this shirt!

Pat Boone re-surfacing to sing the praises of a walk-in tub for the elderly is just short of amusing.  Strolling into a bathroom decked out in white shoes, dark blue sweater vest, white pants and a light blue long-sleeved shirt, Pat looks as 1960’s as anyone can at his age, and could reasonably argue that the wrinkles are from a prolonged soak in the aforementioned tub.  I expected to see Andy Williams and Elke Sommer come bouncing out the tub crooning “Moon River.” I looked for a glass of milk perched on the vanity, but alas, found none.  This endorsement is a lot less cheesy than his decades old “Two outta threemium folks choose . . .”  and if you’re not old enough to remember that endorsement, rest assured, there was a glass of milk on the set.

I never liked Alex Trubeck and his endorsement of a wonder insurance for the elderly reminds me why.  Alex is not exactly a “has-been,” however, in my mind he’s a “never-was.”  Convincing old folks that they can save their loved ones the burden of paying to bury them for thirty odd cents a day never put his career in jeopardy, but it should!  He quickly adds “per unit” at the end of his statement and the commercial goes on to remind us that the average funeral cost is over $7000.00.  Paid monthly, that “unit” costs a little less than $10.00.  What Alex fails to mention is the value of a unit– $1000.00.  So, if I want to fly the concrete kite without any monetary onus on my loved ones, and if I want an average funeral, I should start paying this bunch of highway robbers, hum-m-m . . . let’s see . . .  ten bucks times eight (to play it safe, don’t want to be a burden, remember!) . . . that’s close to $80.00 per month not to be a financial pain-in-the-ass to my precious, but still alive, family.  Alex, I’ll take “Funerals” for 35 cents a day. 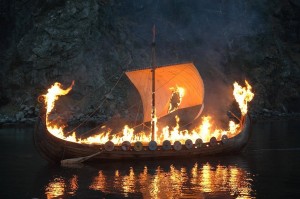 This ceremony involves placing a dead body on a raft, setting it afire and pushing it out into your favorite lake or the ocean. The answer– What is the Viking Special, Alex?