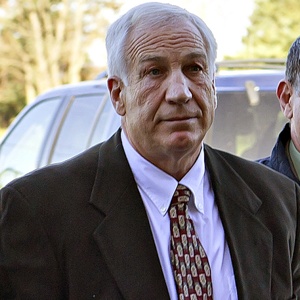 The legal principle, “Innocent until proven guilty,” is difficult for a person to reconcile regarding certain crimes.  Violent crimes qualify, of course, such as murder, forcible rape, and any other crime our society deems heinous, and when that crime is publicized through the media, such as television and the press, people know more details about the allegations.  The more they know, the more they take sides.  The more they take sides, the more heated the discussions.  Such is the case of Jerry Sandusky, the former Penn State football coach accused of sexually molesting 10 boys over a period of 15 years.  People are taking sides.  In these types of crimes, however, most people imagine the worst and are usually not shy in saying so.  One part of us hopes these terrible things didn’t happen, while another part of us wants justice, even revenge, if these things really did happen.  It’s human nature, and if such thoughts race through your mind about Mr. Sandusky, or any other person accused of a heinous crime, relax.  You’re normal.

If there is a fascinating aspect to any of these crimes, it’s the  excuses offered by the accused.  In November 2011, Mr. Sandusky contends that he was just “horsing around” with the young boys.  “Horsing around?”  Really?  He states this like it’s some type of honor to soap up and shower with him.  Radio personality Dennis Malloy of The Dennis and Judi Show on NJ 101.5, said it best . . . he compared the cavalier excuse to a Boy Scout badge.  Right up there with the Personal Fitness badge and Family Life badge would be the Horsing Around badge!  Imagine a mother’s pride when little Johnny comes home from a scouting weekend and announces, “Guess what, Mom?  I got my “horsing around” badge with Mr. Sandusky!”Listen to The Dennis and Judi Show on NJ 101.5!

Naturally, this would lead to all types of awards based on the actions of miscreants, such as the Jeffery Dahmer, “Guess who’s coming to dinner” award, the Timothy McVeigh “Innovative uses for fertilizer” badge, D. B. Cooper “Top Jumper” trophy, and the Adolph Hilter “Good Citizen Award.”  The excuses for their crimes goes something like this:

McVeigh hated the government (who doesn’t, not a valid excuse to head to Ace Hardware!)

Cooper got away, so he has no excuse.

Now we can add “horsing around” to the long list of crime excuses.  But does such a crime like “horsing around” really rank among the actions of a McVeigh, Dahmer or Hitler?  Probably not . . . unless you’re a ten-year-old boy in the shower.