Try this riddle . . . How many debates are needed to win a Republican nomination?  Answer?  Nobody knows, yet!  As of this writing, the debate in Arizona was the 20th such deliberation, which now finds the public searching for Gilligan’s Island reruns to complete their evening TV experience rather than face another reality show circus routine with a group of character assassinating foul balls.

The debates started with six (6) candidates in May 2011, blossomed to nine (9) in September of 2011, and ended, thus far, with four (4) hardened little political musketeers on February 22, 2012. Besides twenty debates, there are ten forums, a Twitter debate and one conversation (between Gingrich and Huntsman) that occurred during this governmental version of Survivor:  Washington D.C. As each and every candidate is voted off the island, we ask ourselves, “What!?!”

Whether you opine on Obamacare (a.k.a Romneycare), birth control, prayer in school, the “Opps” moment, same-sex marriage, or just wonder if Rick Santorum is crazy as a loon, you must ask yourself how any of this is going to change this nation or your life for the better?  Probably, it will not!  Will things get worse if any of these guys are President?  Aye, that’s a scary question!  Since I’m apathetic to both Republican and Democratic debates (because I don’t enjoy watching horror), I’m not really the person to offer a “blow-by-blow” analysis of any political debate.  It’s like watching holy wars, and like the late George Carlin, I’m all for a group of holy men killing off another group of holy men. I just don’t like the collateral damage– namely me and the rest of America.

Now any group of wanna-be politicians can line up on stage and make promises, or tell a bunch of half-truths to garner your vote.  And if everyone in the group is supposedly on the same side, they will attack each other like well-fed pit bulls hoping to get your vote.  Political cannibalism existed long before the United States was born and probably predates actual cannibalism. This doesn’t imply that these canine-fanged, political gladiators aren’t regular guys and gals.  In fact, many of them are nice folks, just like you and me.  It’s their job to grab your vote by any method possible.  Lies, misquotes and inept public speaking skills are simply tools needed to get voters on his or her side.  Some do it by impressing us with lessons they learned at school, like “Show up every day, and you can’t fail!”  Ron Paul and Rick Santorium came to every debate, so perfect attendance must count for something.  Others, like Michelle Bachman, impress people with public displays of talent. 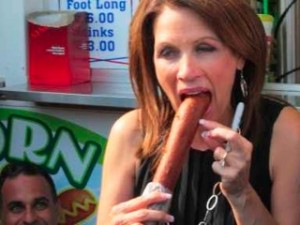 Bachman at the Iowa State Fair

I think some candidates need to consider snappy nicknames or a name change altogether.  Who wants a President with a name like Newt or Mitt?  The voting public wants strong names like John, James, George, Franklin and Obama.  Personally, I believe Gingrich squandered his opportunity early in his career to prove he can straighten out America, so I don’t think a simple name change will help.  Mitt Romney, the front runner by a slim margin, might be saved with a little name tweaking.  Mittalica Romney sounds pretty sturdy, or add a little international flair with Mittron Romney.  Imagine this debate,  Mittron Romney versus Godzilla!  Now I’d watch that! That’s ballsy politics in anybody’s book!