It reads like a movie pitch.  A double-amputee Olympic runner who supposedly guns down 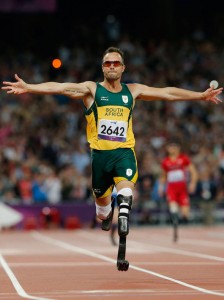 his girlfriend by accident on none other than Valentine’s Day.  As the movie dawns on the screen, a beat up 1959 Peugeot convertible rolls up to the scene of the crime and a short dark-haired stogie-toting detective in a rumpled beige Italian raincoat steps out, a swirl of smoke trailing behind.  Oh, one more thing, it’s not a movie script, but the real life trials and tribulations of the controversial runner, Oscar Pistorius.

The highly successful Paralympic champion from South Africa is now on trial for killing his girlfriend Reeva Steenkamp in February of 2013.  Oscar claims it was an accident, that he thought she was an intruder and shot her through the bathroom door.  Paranoia, stupidity or plain old murder?  We may never know but I do know that most intruders rush to the bathroom as soon as they break in a home or building, right?  And, although grade school teachers throughout the decades drilled home the fact that “You should have gone before you left home,” the hapless burglars never seem to learn.  So it’s no wonder  that Pistorius shot her through the door.  Again, just sounds like a big misunderstanding.

Oscar’s a little reckless when it comes to guns, shooting a gun through a car sunroof in 2012 and beneath a restaurant table just one month before Steenkamp’s death. His ex-girl friend Samantha Taylor testified in court regarding another gun incident where Pistorius jumped out of his car, pulled a gun and pressed it to the window of a BMW he felt was following him.  All of these were probably just accidents or misunderstandings.

Pistorius was always a pathetic creature since he was born with fibular hemimelia in both legs (no fibula bones in either leg), and at 11 years of age, both legs were removed at the knees.  He began running in 2004 with a set of prosthetic blades and quickly became known as the “Blade Runner” after participating in the 2004 Paralympics.  He ran in the T-44 events designed for one-leg-below-the-knee amputees, although his division is the T-43, two legs missing.  Even with the upgrade to the so-called “more stringent” class, he managed to garner the vast majority of gold medals in the 100 and 200 meter distances.

When Pistorius qualified for the 2012 Olympics, the controversy began as to whether Oscar’s “blades” added an unfair advantage against able bodied athletes.  A German team of researchers determined that Pistorius’ Flex-foot Cheetahs allowed him to use 25% less energy to run than those with legs and feet, but that’s not really a popular thing to say, so arguments bandied back and forth as to what physical features and elements should be tested to determine what advantage was afforded “spring foot.” 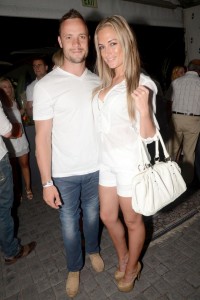 The answer is visibly obvious, the man runs on springs.  Other humans run on flesh and bone.  His leg stride is faster, because his legs weigh less, and his stride can be adjusted by the length of his blades.  Pushing the heart strings aside, he shouldn’t be competing in the Olympics, but against other blade runners.  These runners use a machine for propulsion, and if this is allowed, it is no different than letting someone with arthritis use a bicycle on the track.  And now, perhaps because of his disability and the advantages it provided, or just a deep, evil, violent behavior, Pistorius is hoisted by his own petard.  Glorius!

This entry was posted in Celebrity and Fame, Law and our society!, Real life, Ripped from the headlines and tagged Bronze, bullets, gold, guns, marathon, murder, running, Silver. Bookmark the permalink.
f898301b37f6ae597321c58a3ae10af1-332