Unlike eggs, cigarettes constantly lose ground decade after decade regarding their impact 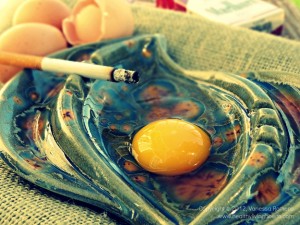 on your health.  Eggs are an “on again, off again” affair.  Eggs were good for you in the 1950’s, but bad for you in the 60’s, came back as good guys in the late 70’s, into the 80’s, fell from grace in the 90’s and now actually are touted help fight “belly fat.”  Cigarettes didn’t do that.  Despite the staggering revenues and gobs of advertising dollars spent by big tobacco companies, cigarettes are falling out of favor with just about everyone.  This is most evident in advertising, where government regulations, health organizations and non-profit “goody two shoes” groups shredded the marketing machinery of the tobacco industry over the last 50 years.

Fact is, smoking is a nasty, dastardly habit and the tobacco giants were always pretty loose with the truth.  Most statistics and so-called scientific studies were fallacies, and tobacco companies, just like any other industry, were allowed to develop creative advertising to sell their product legally to anybody that would buy it.  Barring illegalities, they could use bright colors, odd characters, animals, exotic places and famous people to appeal, cajole and trick you into smoking their brand.  As one who detests cigarette smoke and cigarettes, I will defend to the death the tobacco companies’ inalienable right to free speech– something the non-profit corporations and governments around the world fail to grant to these population-reducing giants.

Since humans mastered fire, organic materials were bunched, lit, puffed and inhaled for whatever the reason.  Like walking and chewing gum, it’s an infectious habit that will not go away once you’re hooked and no one can be blamed but the person who stuffs the flaming wads of weed into their mouths looking for a flavor,  a taste, a high or a fondness of haggard facial features.  Anyone who barbeques, burns leaves, or was  trapped in a house fire knows that sucking in smoke is a bad thing.  Apparently, as a species, we’re dumber than we look. 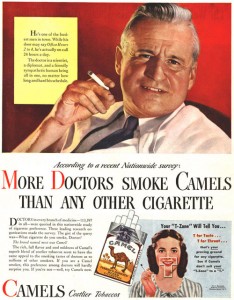 History is wrought with great cigarettes and cigarette smokers.  American cigarettes were all the rage during the First and Second World Wars and some German solders were glad that the United States joined the war just so they could bum American cigarettes off the GI’s.  After WWII, cigarettes in the U.S. were in their heyday, as full page color advertisements appeared in every magazine.  With the advent of television, the tobacco companies pumped advertising dollars into the industry like lard through a goose.  Inventive commercials were shown on every program and many television events were solely sponsored by the tobacco companies (i.e. To Tell the Truth and I’ve Got a Secret).  As the 1960’s wore on, many cigarette commercials were more entertaining than the shows they sponsored.  But, television was the tobacco companies undoing.

First, the FCC (Federal Communications Commission) required that all broadcasters allow the “goody two shoes” groups to conduct “anti-smoking” campaigns on the air for free. The U.S. Congress further meddled when, in 1970, all television and radio was banned from advertising cigarettes.  Like dominoes on a gymnasium floor, the ability of tobacco companies to advertise tumbled.  Cigarettes were advertised in newspapers, magazines and billboards, but by 1999, billboards only advertised anti-smoking messages.  1984 saw the advent of the required Surgeon General’s Warning on all cigarette packs and advertising, and with the recent passing of the Family Smoking Prevention and Tobacco Control Act (2010), tobacco companies can no longer sponsor sporting events, music concerts, or any other type of cultural affair.  The Act also tightens advertising restrictions, not allowing any tobacco products to appear on hats, t-shirts and other apparel.  And you thought the family that chewed, smoked and dipped together, stayed together. 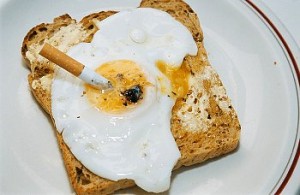 manufactured, crush the remaining carcass of a butt on a sidewalk or rare ashtray, then celebrate a new era for homo sapiens sapiens.  There is one consolation and that is sooner, rather than later, every smoker on the planet will some day take his last drag on that last cigarette.  No fanfare, no celebration, no fancy good-byes, just die letzte Zigarette!