One Man’s Dandelion Is Another Man’s Daisy!

The dandelion is a much misaligned little flower with a bad rap! In North America, it is one 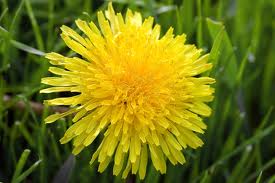 of the earliest plants to bloom in the spring, dotting lawns and landscapes with its bright yellow flowers. As beautiful as this flower presents itself, U.S. homeowners spend millions of dollars per year to rid their yards of this non-lethal, non-damaging plant. Why? The answer can only be obsession! Americans would rather spend their money for a green, flawless field of grass than save for a college education. Not only do they want it green, but well-kept.  Drive through any American neighborhood or development, lower the windows and turn off the engine (unless you drive a Prius). I’ll bet credits to Navy beans that you’ll hear at least one lawn mower, probably more.

So how did Americans become so obsessed with spending their free time riding around their lawns cutting, feeding and re-fueling?  According to an article published in 2011 by theweek.com entitled, Blades of Glory:  America’s Love Affair with Lawns, the Europeans made us do it.  It is often said that imitation is the sincerest form of flattery, but since rich colonial Americans were no more than Europeans on an extended vacation, it really wasn’t imitation that folks like George Washington and Thomas Jefferson thought about.  Nobles and aristocrats of 17th- and 18th-century Europe started the lawn industry with the first mowers consisting of goats, sheep and servants.  Louis XIV of France upped the ante with his tapis vert, or “green carpet” in the Versailles gardens.  Such squares of green were a status symbol for the rich and powerful, and for good reason–  one needed a constant supply of fresh goats, sheep and servants to maintain these delightful, around-the-house (or palace) oases.  It only made sense that men of means, such as Washington and Jefferson, could maintain such expensive patches at Mount Vernon and Monticello, respectively.

After the Civil War and the advent of suburban housing, lawns appeared on the properties of those who were less fortunate than Washington or Jefferson.  Since then, the idea of comfort and success in the United States means looking out your front door and gazing across a weed-free, almost perfect lawn!  A lawn to die for, a lawn that is the envy of your neighbors, a lawn for the kids to play and roll around, and a lawn for the dog to crap on.

This leaves the dandelion out in the cold.  According to Richard Mabey, a naturalist and author, dandelions are on a long list of floral blemishes such as crabgrass, clover, chickweed and so on.  Clover!  Really?  Anyway, a plant that is completely compatible with a carpet of green, the dandelion, seems to be the archenemy of tough-on-weeds turf turds.  In the words of Richard Mabey, “Weeds are plants that sabotage human plans.”  Apparently, all lawns must be uniform except for the purposely placed flower bed or occasional white birch.  No room for little dots of yellow, the dandelion.

The dandelion belongs to the genus Taraxacum of the Asteraceae family.  The word “dandelion” derives its name from the French dent-de-lion which means “lion’s tooth.”   But the most interesting fact about this little lawn pest is that is completely edible, from its tasty little flowers, down to the brittle taproot.  As a vegetable, the dandelion is rich in  vitamins A, B complex, C, and D, and minerals such as iron, potassium, and zinc.  Medical centers are testing dandelions as possible diuretics, appetite stimulants and for treatment of liver and gall bladder problems.

Native Americans used dandelions to treat kidney disease, swelling, skin problems, heartburn, and upset stomach, while the Chinese treated stomach problems and appendicitis, with the powerful herb.  Europeans used the flower’s parts for fever, boils, eye problems, diabetes, and diarrhea.  Try doing that with a  daisy or a zinnia!

So as an army of riding prodigal mowers chop, munch and deposit smithereens of dandelion all over yards or into clippings bags, think of the much maligned lawn guest called the 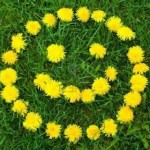 dandelion.  Instead of pouring chemicals and poisons on our yards each year, perhaps we should take something back . . . and enjoy a salad, soup or a glass of wine from  a little plant that is so rich and so willing to give . . . the lowly “lion’s tooth.”