And The Dish Ran Away With The Spoon! 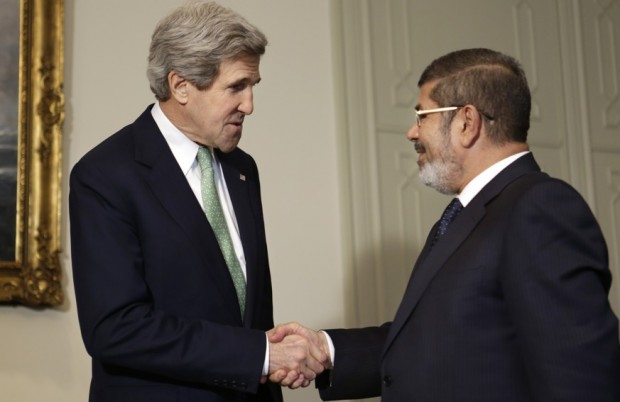 If you behave, I'll give you a lollipop!

John Kerry told the Egyptians to stop bickering and come to a political consensus during his visit last Saturday during his visit to that country.  According to Kerry, the U.S. is concerned about Egypt emerging from an economic crisis and qualifying for a $4.8 billion International Monetary Fund loan package.  Yes, Alanis, there is irony here.  The fact that the Secretary of State of any country would castigate a nation’s politicians for in-fighting when his own Congress is the most partisan, obstructionist collection of back-biting, goof-balls in history is nearly hysterical.  It’s not completely hysterical, because after the meeting, the U.S. rewarded Egypt with $250 million dollars, a little seed money if you will, if they behave.  And to think my parents never gave me one red cent for straight “A’s” or for staying out of jail.  It’s a good thing President Mohamed Morsi didn’t rattle off a few disparaging words like fiscal cliff, budget deadlines and sequester.  It’s not nice to bicker with the Candyman.

In all fairness to Egypt, “bickering” is a step up from the political upheaval suffered by its government.  After the unceremonious booting of former President Hosni Mubarak in 2011, the Muslim Brotherhood became the predominant political party after electing Mohamed Morsi as the Egyptian President.  The Muslim Brotherhood is one of the largest and most powerful Muslim organizations on the planet at 300,000 strong, and its violent history, including a a failed attempt to assassinate President Gamal Abdel Nasser in 1954, concerns many in the U.S. Congress.  Some of the world’s most dangerous terrorists were members of the group, including Osama bin Laden’s top deputy, Ayman al-Zawahiri.  After the 9/11 attack, the Muslim Brotherhood moved away from violent practices and began participating in electoral politics, which draws much criticism from the extreme Muslim factions, particularly al-Qaeda.  In fact, no violent acts are attributed to Brotherhood since 1970.  Seems the Brotherhood is like porridge in a fairy tale–  too hot for the U.S.; too cold for the al-Qaeda.  But the voters in Egypt think the Brotherhood is “just right.”

Like most groups, the Brotherhood is not a homogenous lot.  Some are extremists, some liberal, some conservative and so on, much like the U.S. Congress, for instance.  Congresswoman Michele Bachmann and four other congressional leaders wrote a letter to the Inspectors General asking how the Brotherhood is influencing our culture and our internal government security.  Apparently, they believe that this group is infiltrating the intelligence community in the U.S.  In other words, Big Brotherhood is watching.  This group of conservatives imply that today the Brotherhood captured Egypt; tomorrow, the U.S.  Not that that’s bickering, because they wrote a letter . . .  and you thought Congress wasn’t earning its money.  One of the signers, Representative Lynn Westmoreland, said, “The Muslim Brotherhood may not have the name recognition of al-Qaeda or the Taliban, but that does not mean they don’t have the potential to be just as deadly.”  Throw in the Democrats and the Girl Scouts, too, because anyone who wins an election is as deadly as al-Qaeda.

To think that such suspicion and fear is spouted by a legislative group responsible for a dozen wars in its short history is comically incongruous.  And due to its policies and actions in recent history, voters, non-voters, soldiers, tax payers and the majority of ordinary citizens don’t like or trust the U.S. Congress.  Why should anybody outside of the nation’s boundaries like or trust Congress, either?  Certain people in Congress just don’t like Muslims, and likewise, there’s a big bunch of Muslims that don’t like Americans, but it seems to me that Congress and the Muslim Brotherhood are more alike than either likes  to admit.  Both argue, fight, bicker, condone violence, and mouth off a lot.

So when John Kerry tells Egypt to stop bickering, well . . . as the old adage goes, “That’s the pot calling the kettle black.”  It helps, of course, to just give’em some dough. Maybe that’s the real reason a pyramid is printed on the back of the U.S. dollar.  And the rest of us?  The little dog laughed to see such sport, and the dish ran away with the spoon.