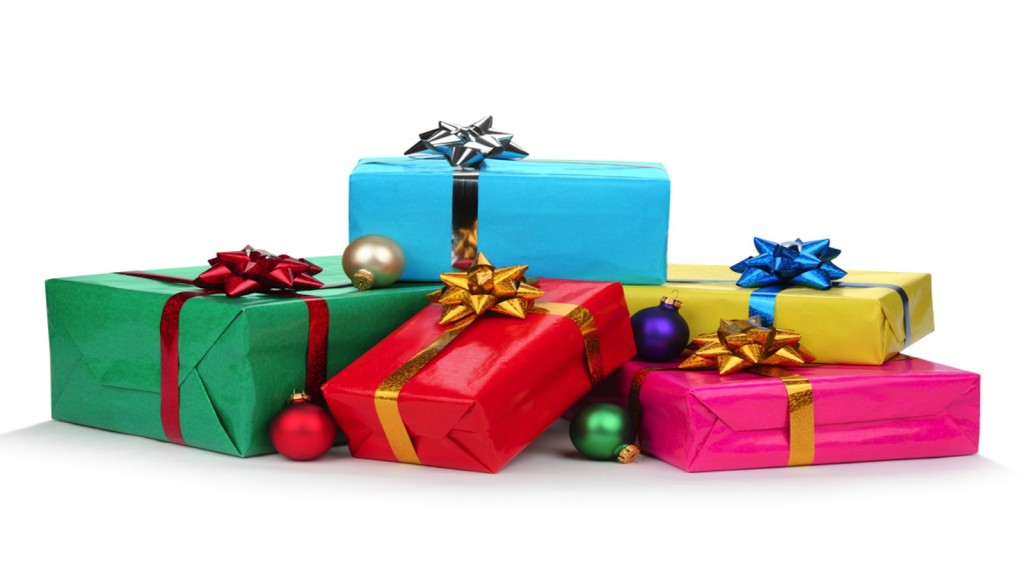 Extra care is required during the holidays.  During the mad rush that is Christmas, you must be careful and responsible throughout this upcoming celebration which is essentially from the day before Christmas to the day after New Years.  A few things you should do responsibly is drink alcoholic beverages, drive any type of automobile or truck, and re-gift.  Since our government finds it necessary to bombard us with the pitfalls and evils of drinking and driving through so-called public service messages, I will turn my attention to an area few folks, both in the public and private sectors, fear to tread– re-gifting.

Re-gifting is a handy way of saving money and dumping former unwanted gifts you received, but re-gifting can be a dangerous, friendship-ending experience.  Truthfully, though, care has less to do with it than just plain stupidity.  Behold the following re-gifting blunders:

Stupid Re-gift #1–  A friend of mine gave me a bottle of wine I knew I didn’t want to drink.  I tried giving it to my daughter who informed me its taste resembled raccoon urine and she refused it.  I was afraid to ask her how she knew anything about the taste of any urine, let alone that of a raccoon.  I put the bottle of the wretched stuff under the bar, where it remained until the following Christmas.  While checking my alcohol ordinance just before Christmas, I found this dusty, unopened bottle of Yellowtail beneath the bar, and could not, for the life of me, remember from whom I received it.  I thought it the perfect gift for an annoying acquaintance of mine, and when I handed it to him, he exclaimed, “How did you know this was favorite wine?”  It was at that moment, I remembered who gave me the wine.  Fortunately, his memory was faulty, too, as he did not mention he was glad I returned the bottle.

Stupid Re-gift #2–  A friend of mine received two coffee makers one Christmas, and wisely decided to re-gift one immediately, thus cutting out the “curve of forgetfulness” that often plagues re-gifters.  But before he decided which coffee maker to give away, he decided to make a pot of coffee with each to see which machine he liked the most.  After making his decision, he quickly washed the losing pot, carefully packed the coffee maker in the original box, instructions and all, and even managed to heat-seal the top of the plastic bag that housed everything inside the box.  A neat wrapping job, complete with a gorgeous bow seemed to do the trick.  Both he and I were there when his friend, in desperate need of a new coffee machine, opened the box.  So thrilled with the gift, he hugged the crafty re-gifter, and insisted on making a pot of coffee.  He bounded into the kitchen with a giant smile, only to return a few minutes later with no smile, carrying a wet coffee filter filled with grounds.

Stupid Re-gift #3–  The chowderhead award for re-gifting blunders goes to another friend of mine whose girlfriend bought him a cute set of kitchen towels for his new apartment as a Christmas gift.  Unbeknownst to her, he planned to give her the gift of making her an ex-girlfriend just before the holidays, so he could get his groove on with the new girlfriend for Christmas.  He knew exactly what was in the wrapped gift box because as she left his apartment for the final time she screamed, “And you can keep the fucking kitchen towels!”  Short on time to purchase a gift for the new girlfriend, he thought that the freshly wrapped package would do on such short notice.  He and his new GF met for dinner on Christmas Eve, and he anxiously handed her the smartly dressed box.  She read the tag attached to the beautiful bow, promptly threw the gift at his head as she stormed out of the restaurant and, consequently, out of his life.  He slowly picked up the box and read the tag.  It read, “All my love, Barbara.  Merry Christmas!”  Her name was Jennifer. 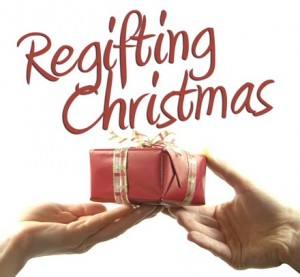 So . . . let this be a warning to all you re-gifters.  Be sure to remove the old tags from unwrapped gifts, iron any previously worn clothing, and dump the crumbs out of the toaster before passing it on.  Like drinking, driving, gambling, or switching girlfriends and wives on short notice, please, please . . . . re-gift responsibly!