What’s in a name?

Remember George Carlin’s Seven Words You Can’t Say on Television?  One of those infamous words was “tits,” and George thought it didn’t even belong on the list.  “Sounds like a nickname!” he said, “Hey, Tits, com’ere! Tits, Toots!  Toots, Tits!”  As you can see, nicknames can be a fun thing.  Nicknames are short, simple, easy to remember, and most importantly, they should be fun.  Many nicknames evolve among friends and are based on physical attributes, behavior, or other personality traits, like freckles, gimpy, hawk eye, and cool breeze. Others are a result of a cute replacement for a formal name among people who are very fond of each other, like darling, sweetheart, and honey. Nicknames can be cruel, such as fatty, four-eyes, dumbo, and stinky.  But all personal nicknames, whether helpful or hurtful, funny or cruel, are usually based in fact.

Not so for schools and sports teams, however, where a plethora of ill-fitting monikers

abound.  This is particularly true for high schools, where the audience input for deciding on a nickname is, shall we say, limited.  High schools are plagued with adult interference; high school nicknames and their associated mascots are a blend of stupid politically correct academic labels and long-gone failed industries.  One prime example is the high school my daughter attended whose nickname is “Konkrete Kids.” Misspelling aside, the adults in the community constantly moon over the glory days of the concrete industry of the past and even plagued the school with a museum within the school building itself.  Young “Konkrete Kids” are forced to parade by this smoke-stack display, a constant reminder of their town’s failed attempt to keep it the “cement” center of the universe.  While the Konkrete reference may bode well for the football or wrestling teams, the swim team was never too enamored with the idea and simply used “Kids,”which in a twist of coaching genius, was printed on the swim caps.  A newly-hired principal showed some moxy, or so we thought, when she proposed changing this beastly name, but in typical adult fashion, her solution was much worse than the original.  She unveiled that the nickname should be “Konkrete Foundations” as a demonstration that this school provides its students with an excellent academic foundation.  A good start to academic excellence? How about spelling concrete correctly! 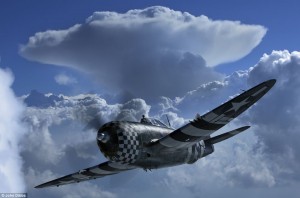 I, too, was saddled with an unusual high school nickname, Thunderbolts, which seemed innocuous until one understands that it’s not referring to an atmospheric disturbance.  Thunderbolt was the name given the World War II fighter plane designated P-47.  Were they built in this city?  No!  The only connection?  The plane was used to train 1500 pilots in gunnery practice during World War II.  The Thunderbolt, nicknamed the Jug, was the heaviest single engine propeller-driven fighter in history, and although it was almost as sluggish as a B-17 bomber, the Jug’s saving grace was it durability.  Since it was a veritable flying brick, neither the Germans nor the Japanese could knock the thing out of the sky.  When I was in high school, I never knew Thunderbolt was a plane, and during my tenure, I don’t think our football team would ever perform was well as it did if we knew our real nickname was “Jugs.”  Although the adult population never erected a museum in the school for the P-47, they did correct the misconception that the nickname was a powerful lightning strike by painting a mural of the plane on the equipment shed out front.  The football team was never the same after that.

Finally, the worst high school nickname, with which I was personally involved, was our high school rivals in the adjacent town–  the Poultry Clan.  While roaming this school’s halls looking for a bathroom in 1969, I ventured upon a billboard with a cardboard cutout of a giant rooster with the words, “Mr. Rooster says, we may be chickens, but we’re not featherweights!”  Good God, y’all!  Now there’s a mighty slogan that’ll make you march into Hell for a Heavenly cause!  Of course, this area was well-known for its egg production in the past, and since all the adults are living in the past, well, Poultry Clan seemed appropriate to them.  It is my 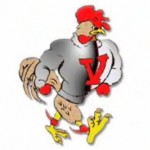 understanding that the school shed its chicken image lately and changed the nickname to a more “politically correct” The Fighting Clan. I’m not sure why it’s the “fighting” clan.  Perhaps because Ku and Klux were already taken.