Good news, Christians!  Lucifer is not Satan and Satan’s not 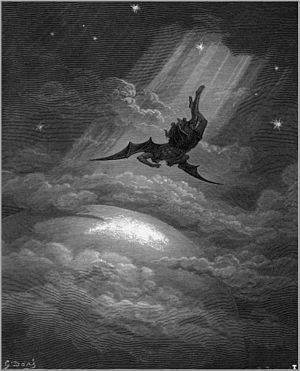 Now, it is common knowledge in Christian circles that Lucifer was an exulted angel on high, and, perhaps, God’s favorite angel.  In the  bar room version of Genesis, Lucifer grows weary of taking orders from God, starts a big pissing match he can’t win, is tossed out of heaven, and lands ass first in Hell.  But that’s not the way it happened!

How does the myth of Lucifer develop?  Well, dispelling Lucifer as a chief angel is a good start.  The Catholic and Protestant Bibles mention archangels twice, and only one by name, Michael.  Hebrew scripture recognizes Michael and Gabriel, but sometimes the Christians sneak Raphael in the side door on September 29 of each year.  By my count, that’s three exulted “big wigs,” but somehow seven (7) archangels appear in various religious tales through the ages.  Lucifer is never mentioned as one of the big wheels in Heaven.

Lucifer is Latin for light bearer, and in ancient times, Venus, or the Morning Star, was called Lucifer.  Lucifer also was associated with a Biblical passage in Isaiah referring to the Babylon King, also known as Helel, a Hebrew word for Shining One often used to describe the Morning Star.  Interpretations run wild as the passage describes the falling of the Morning Star from Heaven.  Again, Lucifer is never mentioned, but what better story to tell than taking Latin and Hebrew terms, mixing them in a giant celestial salad bowl and spewing out a villain cast from Heaven.  Bingo, you’re in the front row!

Icing on the gospel cake comes not from the inspired hand of God, but from English poet John Milton’s epic poem, Paradise Lost.  Blind and destitute in his old age, Milton perpetuates the myth by dictating his daughters a tale of wretched imagination where God does a supernatural “beat down” of his favorite angel and casts him into “the Pit.”  Milton knows drama!  So with a little help from Milton, this was a “bird in the hand” for the who’s whom of Anglo-Saxon religions.  They announced Milton was right, and since fiction is as good as the facts in theological tales, the declaration was clear–  yes, Virginia, there is a Lucifer and he’s a devil! 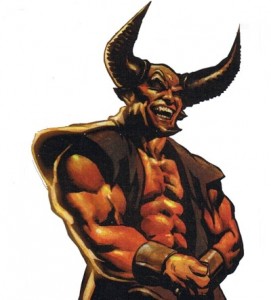 What of the original bad guy, Satan himself?  Satan is Hebrew for oppose or obstruct and in the Hebrew Bible the term “Ha-Satan” appears over a dozen times.  Ha-Satan literally means the accuser, which indicates that Satan is a title bestowed on a being rather than a name.  In Genesis, we finally find someone, other than God, who’s older than dirt, for Satan first appears in the Garden of Eden hawking sinfully delicious apples to one of God’s curvy creations, an apparently hot and sexy Eve.  God knows Adam is a goner, so he essentially needs a super evil bad guy to take some of the heat.  Enter Satan.  God, who is tired of slaving over creation everyday and takes one in seven off, hires Satan to do some of the light work–  torment man and woman till the Judgement Day.  Keep in mind this is the Old Testament God.  It’s highly doubtful the New Testament God would write the Devil a paycheck, especially with the big Brouhaha coming up in Revelations. 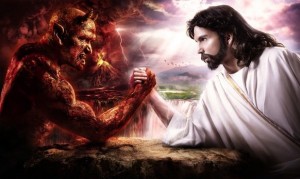 The final caveat to this devilish tale is that the creation of the character that is or isn’t Lucifer backfired on religious scholars.  If anyone is allowed to toss ingredients into the celestial salad mentioned earlier, then we must turn our attention to the book of Revelations 22:16 where Jesus declares he is the Morning Star.  Seems we were wrong all along . . . Jesus Christ is Lucifer!