In a career that spans six decades, no Hollywood star comes close to 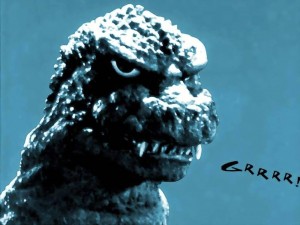 the pop culture craze that is Godzilla.  Starring in three dozen movies, no other actor must endure the ever fickle whims of producers and directors alike, because, after all, the mighty reptile’s career encompasses decades of political change, wars and technological updates, and he keeps up with it all.  What’s that big lizard up to now?  Well, in an exclusive telephone interview, I asked the tough questions just to find out how he does it.

Trout:  Thank you, Mr. Godzilla, for taking time out of your busy schedule to talk.

Godzilla:  Not a problem!  I’ve just been skimming some notes on the next Godzilla movie.

T:  I don’t suppose you can tell us what it’s about?

G:  Nice try, but you know the rules!

T:  I know.  But how do you keep up with the times?  Your career started in 1954 and here you are, almost sixty years later, more popular than ever!

G:  I don’t, really, I have a lot of folks that help and support me.  It takes a lot of good people to keep up my image and career, and I thank them all.

T:  That’s nice.  But you’ve changed over the years, including your appearance.  What is your favorite look?

G:  Well . . . I look great today!  The later movies have me slim and trim, and more of a lizard look, if you know what I mean to say, because although I’m cast as a dinosaur, I am a lizard, you know.  Dinosaurs are extinct, ha, ha!

T:  I must say you sound great, then would you say these later years are your favorite?

G:  Not exactly.  Ever since Hollywood decided to make my movies, 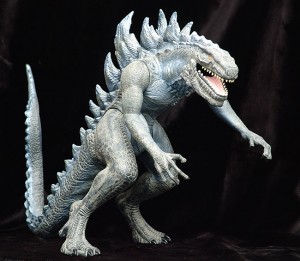 I think the quality improved infinitesimally, but I’m a bit of a romantic.  There’s a big spot in my heart for the classics.  Also, it was easier in the fifties and sixties.  I actually had to have some padding added to make me look like a big, dumb, lumbering dinosaur.  Gee whiz, when Hollywood took over, it was workouts, lots of running, a personal trainer, and the facelifts . . .

G:  Yes, actually some skull reconstruction, too!  Joan Rivers has nothing on me!  These surgeries are big lizard hell I tell you!

T:  Wow!  I had no idea what you went through!  On a lighter note, you starred with some pretty big names in the monster world, like Mothra, Rodan, Destoroyah, Monster X, and King Kong to name a few.  Whose your favorite bad guy?

G:  Mothra and I are good friends to this day, and I think we made a good pair in the old days, but my all time favorite has to be King Kong.  What a kidder on the set!  In our fight scenes, it took a dozen takes to get it right!  Back in ’62 while filming Godzilla versus King Kong, special effects director,  Eiji Tsuburaya, was so frustrated with us during our fight routines, he was going to Toho Studios to have us kicked off the set.  Kong and I would begin fighting and then we’d start to tango or some other dance, then Kong would break out laughing.  He’s such a giggler. 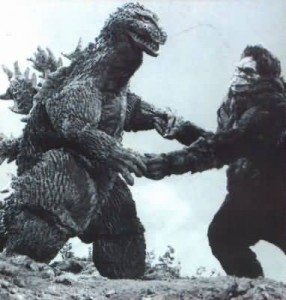 A couple of hams on the set!

T:  It must be great to have such good friends in the business, but what’s the future hold?

G:  To be honest, I want to do a little directing, but I’m having trouble getting into that end of the business.  Being 247 feet tall, every potential job has ceiling height restrictions, and there’s a lot of talk about the size of a director’s chair.  Real chicken crap stuff, if you get my drift.

G:  Well . . . there’s always going to be another Godzilla movie and I do enjoy acting.

T:  Is there a Mrs. Godzilla in your future?

G:  Hmmmm!  There is a little island I have my eye on in the South Pacific, perfect for raising little lizards, but to tell you the truth, my social life is nil.  It’s tough for a big lizard to get a date in this town!