If you’re religious, you probably like a good fight.  Religion and a 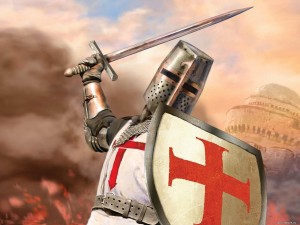 good fight go together, like bacon and eggs, peanut butter and jelly, or brewing your own beer and reloading your own shotgun shells.  Some things are just good fun!  And if you’re going to start a fight, you might as well wage war.  War is about the stupidest action any group within a species can wage against others of the same species.  This is no problem for religion.  Religious leaders love a war.  One religion even created a cute little oxymoron for such conflicts, calling them “holy wars,” and there is no doubt that some of the world’s best wars were religious wars.

First on my list of great religious wars, and just about everybody’s favorite, is actually a series of wars, the Crusades.  The major players were the Christians and the Muslims, who started jabbing at each other in the eleventh century and didn’t stop scrapping  until sometime in the thirteenth century.  The campaigns were expeditionary, which means the Christians took the fight to the Muslims because they didn’t want to mess up their own backyards.  These wars were far from intense, and didn’t really affect the average Joe or Josephine going about his or her medieval business.  In fact, only about 150,000 brave souls died, which is a shadow of a brawl by today’s standards.

By the sixteenth century, warfare was a little more refined and it showed in the little known war with a catchy title, “French Wars of Religion.”  This was an “in-house” tag team battle involving Christians against Christians, although the Christians didn’t really see it that way at the time.  Officially, it was a series of eight (8) wars, involving the French Catholics and the Protestants, or Huguenots.  It lasted a little less that forty (40) years, but casualties were more modern-day with a body count of between two and four million, showing the world that the Christians were really improving in the killing department.

Christians go at it again in the seventeenth century with the ever popular Thirty Years War, and prove that internal strife never takes a back seat when there’s killin’ to do.  Capitalizing on lessons learned in the past, the Protestants and Catholics manage to “deep six” about 11 million sacred souls, before they probably forget what the hell they were fighting about in the first place.  In a bold marketing move, the nomenclature of war changed during this particular conflict.  Instead of a series of wars, the major conflicts were called “interventions,” with a least one “revolt” by the Bohemians.  Anxious to spread the fun around Europe, and perhaps in the first ever show of political correctness in history, several major nations or states were listed in the credits:  the Danish Intervention, the Swedish Intervention, and the French Intervention.  Seventeen nations and/or states were involved off and on, including Russia, England and military powerhouse Transylvania.  Most of the fighting occurred in what is now Germany, setting the stage for what was to become a historical past time for Western Europe– chopping up German lands into little bits for all the winners.

Except for some minor skirmishes and a majority of Catholic mothers throwing Protestant boyfriends out of the house, religions pretty much kept to themselves until 1975 when the 15-year Lebanese Civil War erupted.  Despite its name, it wasn’t very civil, but it did get the Christians off each other and back fighting with the Muslims, namely, the Sunni and the Shi’a (Shiite).  It was a small, cozy little war that killed less than a quarter of a million people.

The following decade brought more fun to the world stage, when in 1983, Christianity and Islam showed the world that the lessons learned in secular wars was not lost on the devout.  If large military conflicts can be named “one” and “two,” e.g. World War I and World War II, then religions can do it, too!  The Second Sudanese Civil War was born, and although everyone agreed this war was just a continuation of the first Sudanese Civil War fought between 1955 and 1972, they were decent enough to give the conflict its own name so the press wouldn’t confuse the two.

Finally, the last and ongoing war, the Afghanistan War, is being waged by the Coalition forces, a.k.a the United States.  It’s a battle of Christians, both Catholic and Protestant, with a few Jews thrown in for good measure, against, well, the Muslims again, although this time the real culprits aren’t really Muslims, but Jihad, or “holy war” radicals.  This apparently differentiates them from the blood-thirsty radicals of yesteryear.

Now, many ecclesiastical folks take offense when someone connects the practice of war with divine disagreements.  Godandscience.org reminds us that only 7% of the wars in recorded history were supreme-being motivated (and over 50% of those involved Islam) and that if religion was the major cause of war, the seventeen (17) wars waged by the United States should be mostly religious conflicts, since the U.S. is a most churchly nation.  They credit only one war as religious, the Afghan War.  One interesting statistic listed is that only 14.2 Americans per year die in a religious conflict, fewer than die by dog bites, which will come in pretty handy if you find yourself on Who Wants to be a Millionaire! They also credit atheists with spreading all these vicious rumors about the hand-in-hand relationship between religion and wars.  Christians, Jews, and Muslims don’t render opinions on the subject, I suppose.  At least one good thing happens every time we go to war, whether it be secular or nonsecular–  God is always on our side!